Soon after my divorce in 2000, I became the primary custodian of my two sons CJ and Brandon. I remarried in 2007, but those years as a single parent gave me a different perspective on fatherhood and the task of training my sons in the world of dating and relationships.

I have always believed that the role of any father is to guide, guard, protect, provide and prepare their children for life. This is what I call the “2G’s and 3P’s of fatherhood.” During my time as a single father, I was faced with the question of how to get my children ready to meet the woman I was about to marry. How could I guide and guard them from potential relationship woes? How could I protect, provide, and prepare them to be in relationships with their girlfriends and eventually their wives?

I had to lead by example. As a father who has sons, you must understand the power that you have: because you are the same gender as your sons, you will have the greatest influence in their lives. How they walk, talk and relate to life will come from your guidance or lack thereof. 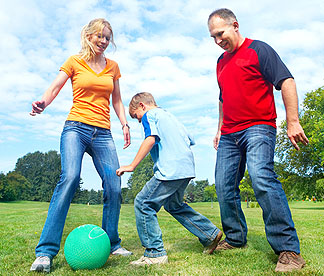 At first, as a single man on the dating scene, I made the mistake of bringing women around my sons too prematurely. It was a huge mistake, and one that I hope you will avoid if you are in this situation. What I learned is that children whose parents have gone through a divorce believe that relationships do not work. This belief is only reinforced when you introduce a new girlfriend to them, then pretty soon the relationship ends. That happened several times with me, and then I decided that the next time would be different. I wanted to really get to know the woman that I was going to bring around my sons and ultimately consider marrying.

The first step I took before heading back on the dating scene was to take a vow of celibacy. That was the best approach for many reasons — because of my own faith convictions, and because the relationship needed to be based on issues related to character and relational compatibility. I didn’t want my judgment (or hers) to be clouded unnecessarily.

Next, I let the young ladies that I was dating know that my ultimate goal was to find out if we were compatible for marriage. You would be shocked at how many women appreciated that up-front honesty!

I only invested time with women who could appreciate these prerequisites. And after making these decisions, I met my future wife, Clarissa, on June 16th 2006. Clarissa had made similar vows to herself before entering the dating scene, so when we met it was like magic. She introduced me to the relationship stages outlined by Dr. Willie Richardson in his book, Relationships with the Opposite Sex, which helped to give structure to our relationship. These steps are:

After Clarissa and I reached the “intimate friends” stage in our relationship, we decided it was time for her to meet my sons. We arranged to do this one night around a Monopoly game. Everything that night went off without a hitch! The boys loved her. Clarissa and I were married a few months later, and although every marriage requires a lot of sacrifice and adjustments, life has been beautiful every since!

Divorce is hard, but you will learn invaluable lessons about yourself in the process. The lessons are especially useful when children are involved. But thanks to the steps my wife and I took, my sons now believe that marriage can work and they are looking forward to the day when they will meet young women of character and have successful marriages of their own.

Carlos Phillips is Executive Director of Healed Without Scars Ministries: Divorce Recovery and Remarriage. Find out more or read about how Carlos moved past the pain of his divorce in his book, Healed Without Scars, available here. Carlos and his family live in Dallas, Texas.