3 Ways to Avoid “Blind Spots” with Your Daughter

We’ve all heard the term “blind spot” when it comes to driving. And just to make sure we’re all in the same lane, here’s how the dictionary defines it: “An area where a person’s view is obstructed.”

And though this term refers to our line of sight when driving a car, it also serves as a clever metaphor for life beyond the wheel. Why is that, you ask? Because every one of us is vulnerable to mishaps or accidents in those areas where our view is less than clear.

Relating this to dads, have you ever wondered how your personal blind spots might be impacting your daughter? Is your view obstructed to ways that your “driving”—the way you steer her or influence her by your responses and choices—affects her? Truth be told: the way you “drive” when she’s along for the ride impacts every part of her life. Stated another way, your blind spots have the potential to harm her or even put her in danger.

But let’s be honest, sometimes it can be hard to come out from under the illusion that we’re expert drivers because then it would require admitting that maybe we don’t have things under control or that we can’t see everything plainly. And to make matters worse, what happens when someone points out something we’ve missed or done wrong when we’re at the wheel?

Bottom line: Every move we make impacts those with us in the car when we’re “driving.” Even more, when our view is obstructed and we don’t see how the things we’re doing negatively impact those around us, it’s in those times that there is greater potential for unintended or catastrophic injury to those we love. 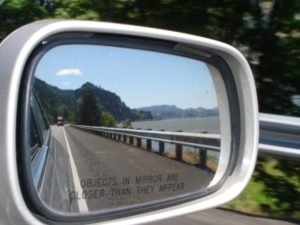 You’ve no doubt seen these words inscribed on your rear-view mirror: Objects in mirror are closer than they appear.

How true this is when it comes to your relationship with your daughter. Whether she is in the car [of life] with you or in a car following behind yours, she is closely watching and listening and taking note.

That said, here are three common blind spots that dads can have with their daughters:

1. Speaking with harshness. Sometimes men are unaware that their strong masculine voices sound harsh, mean, or angry to their girls. Additionally, they may hear themselves as sounding less intense than their daughters do, even justifying their tone of voice when they feel the situation calls for a certain level of intensity. And though our individual preferences regarding volume levels could be described as a Mars-Venus thing (men are from Mars, women are from Venus), if you want to connect with your daughter’s heart, you’ll have to take it down a few notches. Because when a daughter experiences her dad as overpowering and domineering, she interprets his commanding stance as unloving and uncaring, which makes her feel dishonored and rejected. That is when she’ll more readily go into attack mode and retaliate in like kind or put walls up to defend and self-protect.

Dad, softening your tone will touch that deep place in her heart that longs for and needs your approval and affirmation.

2. Inattentiveness / Not Listening. I’ve heard a lot of daughters say that their dads sometimes seem more interested in their own work, sports, hobbies or ministries than in them. And this conclusion tends to be based on watching where their dads spend the bulk of their time, attention, and money, particularly when they appear to have energy to invest elsewhere. Then add in the fact that the majority of men struggle to sustain interest during long conversations—especially if there’s accompanying emotion, and often due to having used up the bulk of their words and listening skills during the day—and there’s typically very little margin upon coming home for attending to a talkative daughter who has a need to process life.

But God has given us two ears and one mouth to remind us to listen twice as much as we talk, and when you listen wholeheartedly, you let your daughter know that she’s worth being heard.

3. Authoritarian Stance. We’ve all heard it said that “rules without relationship equals rebellion.” So when rules are set in place without there first being a solid foundation of relational connection, a daughter can easily conclude that her dad loves her less for who she is and more because she performs right or acts perfectly. For her, a relational connection means spending time together, listening to each other, playing together, attending events that she’s involved in, celebrating victories and milestones, doing projects together, working alongside each other, volunteering together, etc.

Spending regular, consistent face-to-face time with your daughter communicates that you care more about winning her heart than being the rule enforcer.

Dad, if you’re ready to decrease the potential for blind spots, here are your action steps:

The next time you get in your car and see the eight familiar words on your side mirror, Objects in mirror are closer than they appear, let them prompt you to consider how your “driving” on that particular day is impacting your daughter.

Better yet, why not ask her if there’s one area [a blind spot] where you could do better in making her feel loved and protected and safe.

After all, there’s no better time than the present to improve your driving record, right? Go dads! 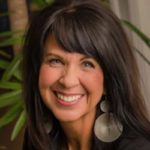 Dr. Michelle Watson is a licensed professional counselor in Portland, Oregon, founder of The Abba Project, a 9-month group forum for dads of daughters (ages 13 to 30), and author of Dad, Here’s What I Really Need from You: A Guide for Connecting with Your Daughter’s Heart, available on Amazon, Audible, and many other places. She also hosts a weekly radio program in Portland called The Dad Whisperer, which you can access as a podcast on her website and on iTunes, Spotify, and Google Play Music. Visit drmichellewatson.com for more information and to sign up for her weekly Dad-Daughter Friday blogs. You can also follow or send feedback on Facebook and Twitter.