as told to Brock Griffin / fathers.com 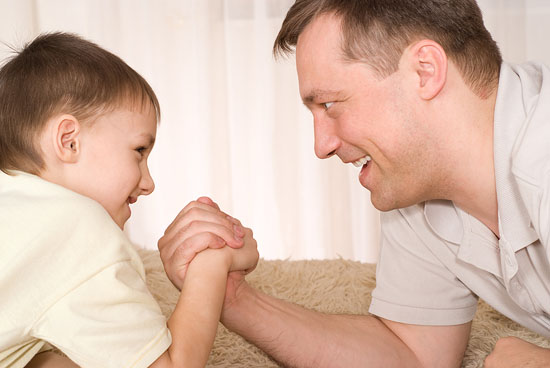 But for this week’s blog, I’ll share some insights from a man named Hector, whom I had the privilege of interviewing not long ago. His story and his insights about bullying are powerful.

Chances are the word “bullying” conjures up images in our minds of a conflict in a school hallway or playground; and in today’s world it’s also happening through texting or social media. But Hector believes that bullying doesn’t start in a schoolyard, but in the home. That’s what he lived out for years. He was bullied by his father.

His dad routinely called him stupid and Hector was often punished brutally. He recalls how an overwhelming fear and anguish left him feeling worthless and unable to think straight. There were times when his father would ask him to carry out a simple task like getting a screwdriver from the garage, and Hector would get so anxious and tense that he’d forget what he was supposed to do by the time he reached the garage door. Which only brought on more cursing and abuse from his father.

So then, when Hector was at school, he tried to prove himself somehow on the playground. Anytime there was a conflict, he quickly became violent and disrespectful—a bully.

Years later, when Hector became a father, he followed the same pattern with his kids: being aggressive, talking down to them, and so on. When he coached their sports teams, he was that way with all the kids.

Eventually the pattern repeated itself again, as Hector began to see the same behavior in his own son. During a heated confrontation, Hector’s son spoke the truth in plain and forceful language. As a father, Hector’s eyes were opened to his behavior and the cycle that was being repeated. He gradually changed his ways and became a much more loving and affirming dad to his kids.

Through it all, Hector also realized that his own father was never really being malicious and had not set out to be a bully. It was just the way he learned to handle things, and no one ever taught him anything different. Later, Hector and his father reconciled and had a good relationship for about five years before his dad passed away.

Surely some fathers will see themselves in different aspects of Hector’s story: Are there elements of bullying in the way you relate to your kids? Do you ever get in their face or overpower them physically? Do you say things that tear them down instead of building them up?

Then, if you had a similar experience with your dad, Hector’s insight is powerful: your dad probably didn’t know any better; he probably never had chances to learn a different way.

So, if you’re wondering what Hector learned and what he does now that is so different, here are three lessons he learned through the process that he hopes will help other dads to not be a bully to their kids.

1. Be careful about the expectations you have for them. So often, we place a burden on our children for what they can achieve, and it’s all about what we expect of them, not what they want or hope for. It’s better to discern their goals and dreams, and then encourage them in those areas. That takes time and we need to be committed to partnering with them to help them identify their gifts and talents.

2. Point out mostly the good things. Try to find five or six things your child did with excellence, before pointing out any mistakes he or she might have made. Say, “You were really good at this …” Or, “I love the way you did that …” Hector says being positive really makes a difference, and it showed when his daughter came to him and asked how she should handle a tough situation. She would have never done that before, when he was always critical of her.

3. Open your heart. Commit to really understanding what your kids are thinking and feeling. They need to feel like they have a voice, and they need to trust their dad to hear and respect that voice. If you have the courage, uncover how they felt during times when you let them down or went too far. Ask questions like, “What do I do that makes you uncomfortable or disrespected?” It can be hard to hear those things, but your humility will make a big statement; they’ll see that you really are open to doing things differently.

Quite a few of us were probably bullied by our fathers or others during our childhood, but we cannot continue that cycle with our children. It’s never easy, but we must find ways to slow down, think about what’s really important, and be more understanding with those kids we love so much.