A 5th Grader Describes 3 Ways to Be a Better Dad

We get to read a lot of priceless comments about dads written by kids as part of our Father of the Year Essay Contests, and here’s an example from a 5th grader named Brennan. He’ll probably make you laugh, but you’ll also be challenged to be a better dad: 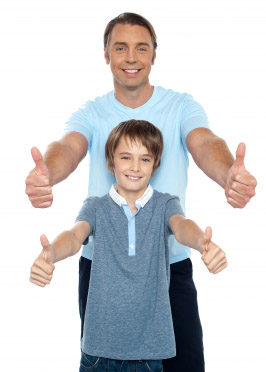 When I talk to my dad, he never says “uh-huh” like some people do before you’re even done talking. Dad really listens; he never criticizes me or yells at me.
Dad holds the door open for women—this shows that he respects them. Mom never has to open any door when he’s around or carry anything heavy. Dad says she works hard all day and if he can help her in any way, he will.
Sometimes Dad and I will have a father-son day—this means we go to Home Depot and do “man things.” We look at tools that we don’t have any idea what they are used for and maybe one day we will buy them just to have them around just in case.
When he gets really old, like 45 years old, I will be taking him on a father-son day and wheel him into Home Depot just to look around and touch things, just like he used to do when I was just a kid.

Wouldn’t it be nice to have someone pushing us around Home Depot in a wheelchair?

Let’s not miss the powerful ways this young man is learning from his dad what it means to be a father. To drive it home, here are Brennan’s three points:

– Listen to your family members. Brennan’s dad is quick to listen and slow to become angry, and it makes a difference in their relationship. It may seem obvious, but we too often forget: good listening requires us to stop talking, pause, and let a child finish her thought even when her talking has become long and tiresome, or even when we already know what she’s going to say. We need to listen to what they are saying on the surface and what they are really saying from their heart. Good listening informs our actions as fathers.

– Show respect for women—especially the mother of your children. Through your actions and your words, show that you place high value on her role and all she does. How are you doing at this? If you’re married, does your wife know you’re there to serve her, and that you respect her for who she is and the role she plays? This is an important area of modeling for your kids.

– Be actively involved with your children. Brennan mentioned having father-son days when they can do “man things.” Kids treasure that time together, whether it’s planning a special day together or just bringing them along while you run errands. But it’s important—for a day or even for a few hours—to escape everyday responsibilities, break up the routine, and create those opportunities when you can really connect and make memories together. Your child needs to know that during those hours, your time is like a big buffet—he can have all he wants, and no cell phone or work demand will distract you or pull you away.

Those are your fathering objectives for the next week, straight from a 5th grader: listen, show respect, and be involved.

Which of these areas is the biggest challenge for you? Or, what have you learned that has helped you address them? Leave a comment either below or on our Facebook page.