Getting More Involved as a Dad will Change You

We hear great things about the WATCH D.O.G.S. (Dads Of Great Students) program. It’s such a simple idea, but something about dads giving a day to volunteer and get involved at their children’s school inspires people in amazing ways.

We’ve heard testimonies from two different dads who said that getting involved in this way has changed them as men and fathers. 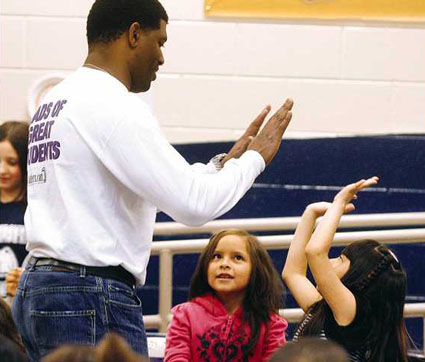 This first one is from Mike, in Kentucky. (These are pieces of what he wrote on the WATCH D.O.G.S. Facebook page. You can read the whole thing here.)

A few years ago, the idea of spending time at school was not in my thoughts. Work was work, play was play, and school was a place for kids. I was a dad that went to school whenever my wife told me to.

But Mike’s daughter invited him to the Pizza Night to learn about the program, and he reluctantly signed up. Then the big day came. As he wrote:

My daughter was so excited as we entered her school. [Then] everything was happening at the speed of light. Stand here, look there, wave at the kids and their parents. Have my picture taken, stand at attention for the pledge of allegiance and be introduced to the school as the WatchDOG dad.

At that moment I think I changed. I had never had a day go so quickly, been so fun, and been so impressed. Everywhere I walked that day I experienced the best our schools can be. I was amazed! As I left that afternoon, I stopped at the official calendar [and] decided I was coming back. No one needed to sign me up this time….

I often think back to those days, and wonder about what could have been, and how lucky I am to have the opportunity to walk through those doors…. I changed that day. I realized that my daughter was a whole lot more important than work….

I also realized that I could make a difference. My presence at school was a positive. I could engage and inspire. I can lead by example….

This is my new normal, and it’s happening all across our great country, from shore to shore as we fathers and father figures sign up, show up and become involved.

Now, here’s a brief comment from a dad who volunteers regularly at his child’s school in Ohio:

Being a WatchDOG has changed me completely—as a man, as a husband, and as a dad. I have much more patience with my own son now as well as other children, and I better understand his academic struggles. I also go home every day [after volunteering at the school] in a good mood.

Every dad, uncle, grandpa and father figure should sign up and be involved in this program—or bring WATCH D.O.G.S. to a school in your community if it isn’t there already. There really is something special that happens to dads when they become “heroes of the hallways.” You can find out more here.

And there’s a bigger truth behind this. When we dads get a taste of how much we can make a difference—how much children thrive on our presence and involvement—it can have a motivating, challenging, sometimes even life-changing effect on us.

Maybe you’re reluctant to dive into something with your child—like Mike was at first. Maybe you’re a new dad who’s still adjusting to the idea of having kids and how to be a good dad. Or a dad who’s settled into a routine with your kids, and it’s all fine, but nothing outstanding for you or for them.

Try something new with your kids. WATCH D.O.G.S. is a great option. One dad we know—a single, long-distance dad—found a deeper relationship with his daughter when he just happened to be with her to soothe her after an accident at a hotel swimming pool. He called that moment, “The Hug that Changed My Life.”

A few years back, we were able to interview a committed military dad who was serving our country overseas at the time. He gave us this inspiring statement: “My relationship with [my daughter] has helped to define who I am. I am a better man because I’m a father.”

When you take that first step—showing that you’re faithful and reliable in your involvement with your child—it often leads to a breakthrough. Your relationship will be changed, and as you become a more engaged father, you’ll also become a better person in significant ways.

How has being an involved dad changed you or made you a better man? Share your ideas either below or on our Facebook page.

Action Points for Dads on the Fathering Journey