When Dietrich Gruen first became a stepdad, he struggled to find common ground with Matt, his step-son. They found it in the strangest of all places—not in fishing or music or cars. Dietrich and Matt’s common ground was their own admittedly broken relationship. 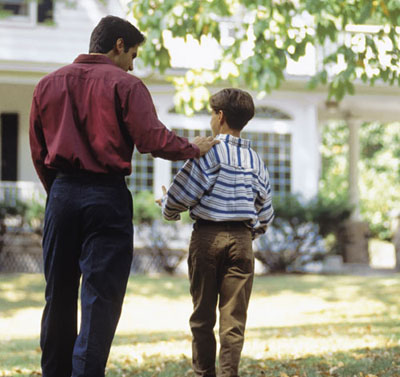 On one particular night, Dietrich came to the dinner table exasperated by the barrage of insults he knew he would hear from his stepson. He had long been hoping for healing words from Matt. Words like, “I was wrong. I’m sorry. Will you forgive me?” But, once again, the teenager disappointed and angered him.

Dietrich writes what happened next:

This time I shot back with a zinger of my own that put Matt in his place. Wasting no time, Sue—the wife and mother we were fighting over—blew the whistle on our verbal duel and dismissed me to my room for a 5-minute time out. Not Matt—but me!

I stomped off to my room—not to come down for three hours. When I stopped fuming, I felt ashamed. I had been trying to coach Matt on saying he’s sorry when he’s wrong. Now I was the naughty one who owed an apology. When Matt finally came upstairs, I swallowed hard and offered this risky gambit: “Matt, I was wrong for insulting you. I’m sorry I did it. Will you please forgive me?”

Floored, he could only mumble: “I need more time to think about what you just said.”

For two hours, Dietrich and Matt talked about feelings, forgiveness, and even how Matt liked that his stepfather had gotten angry. When Dietrich finally admitted to anger and brokenness, they finally came together on a common ground. They hugged that night.