The role of the father or father figure is critically important to the task of taking our African American boys from boyhood into manhood. The vacuum of this required fathering role has had a devastating impact on our urban communities and it is time that we fill this role.

In America today no other community has been harder impacted by the growing trend of father absence than the African American community. Statistics have been quoted that the percentage of father absence homes is as high as 60%. However, these statistics do not reflect the number of fathers who are physically present in the homes but maybe emotionally, psychologically or spiritually absent.

Sharing his concerns for adolescent boys, Michael Gurian, in his book, A Fine Young Man, writes, ” The need for adolescent direction is hardwired into our boys. . . The purpose of male adolescence is to activate in the male ideals of manhood, ideals to which he will commit, by the end of adolescence, to follow the rest of his life.” 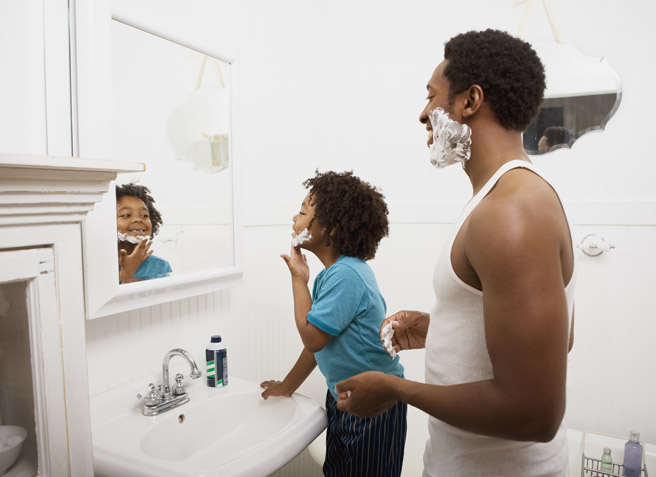 One of the greatest impacts a father has on his children, especially a male child, is the imparting of identity. This identity impartation takes place throughout the life experiences of the male child. The impartations are noted at key passage points. The most notable impartations being the passage from boyhood into manhood. This is one of many passages and is known as the puberty Rites of Passage, which is a maturation process for our boys. The end result is to produce men who are members, guardians, leaders and pioneers of our communities.

You do not have to look very far to see that in the African American community more and more of our “young men” are being a burden to our community rather than a contributor. ABC News 20/20 reported the following statistics on African American Men:

These statistics are alarming to say the least. What can be done to turn this around? We need men who will fill the vacuum of this fathering role and invest their lives in our boys. Men who will take our boys from being benefactors of our communities to being men who are contributors to our communities. How can men do this? The answer is to initiate and complete rites of passage for all our boys.

One of the main roles of a father is to call boys from boyhood up to manhood. The boys need to be called from attachment to their mothers, dependence on others, passive following, and a demeaning, dull and destructive purpose for life. They need to be called up to manhood. Manhood is defined as the taking on of an identity of new attachments in relationships, responsibility for one’s self and other, courageous servant leadership, and the finding of an affable, adventurous and affirmative destiny for life.

This is done in a three step process of a father or father figure modeling, molding and monitoring manhood. This process takes the boy from boyhood and brings him into manhood.

The first step is for the father or father figure to model manhood. As Gurian stated, our boys are hardwired with a need for this kind of direction. If we understand this need in our boys we can make a big difference in their lives just by being a model for manhood in their life. An example of the process of modeling is a boy seeing a father consistently involved day after day in the various activities of his family. Modeling alone is not enough. Although the qualities of our manhood may be observed by our boys they may not understand how those qualities have come to be a part of our lives. To impart these qualities requires us to take the second step.

The second is for the father or father figure to purposely mold the young man by teaching him the requirements of manhood. This requires that the father take every teachable moment to share them and how they relate to the young man’s life. The determining factor of the effectiveness of the father is the degree of transparency he shows with his own struggles and failures. To get back to our example of consistent involvement, the father may be driving the boy to a store and share along the way the motivation and struggles for him to be consistently involved with his family.