Fathers' Involvement in Their Children’s Learning

A 1999 National Survey Commissioned by the National Center for Fathering

All fathers can play a critical role in their children’s education. Research shows that when fathers are involved, their children learn more, perform better in school, and exhibit healthier behavior. Seeking to assess the level of father involvement in a child’s education, the National Center for Fathering conducted a national random sample on October 1-3, 1999.

The survey contacted 894 men and women, and requested their responses to the questions summarized below. Fathers were asked the questions, “Do you….” Mothers were asked the questions, “Does your child’s father….” The survey used a single-stage, random digit-dial (RDD) sample technique to select each sample from all available residential telephone numbers in the contiguous United States. Up to three attempts were made on the selected telephone numbers. Interviews were conducted over a 3-day period.

Since 1990 the National Center for Fathering has sought to champion the role of effective fathering by inspiring and equipping men to be more involved in the lives of children. To accomplish its mission, the Center conducts extensive, ongoing fathering research across the nation in order to develop user-friendly materials to equip fathers.

Percentages of dads who responded “NEVER” … 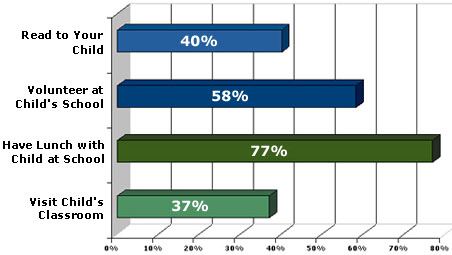 3. Please answer yes or no to the following:*