What My Father Means to Me by Ryan Nelson

One day when I was about 14, my dad invited me to join him and his friend for a round of golf. From the very first hole, I struggled as I usually do. Then came the 8th hole, where I would typically try to lay up in front of the pond in hopes that I could land a 5-iron on the green.

The trouble began when my tee shot rolled right into the water. I dropped a ball on the tee side of the pond, swung back the 5-iron and drove the club head directly into the dirt behind the ball sending it into the water. Then I did the same with another. And yes, another.

Dad told me to drop on the other side of the pond, but I had no interest in that. I dropped one more and hit it high into the sky, but that one also lived up to my golf ability, and splash … number six into the water.

In frustration, I swung the club over my head like a lasso and the momentum pulled the club handle out of my hand, so now there were six golf balls and one golf club in the pond. And it wasn’t just any golf club; I found out that day that it was one of the clubs my grandparents had given my dad for high school graduation. I felt awful, and was immediately sent to the car without finishing the round. 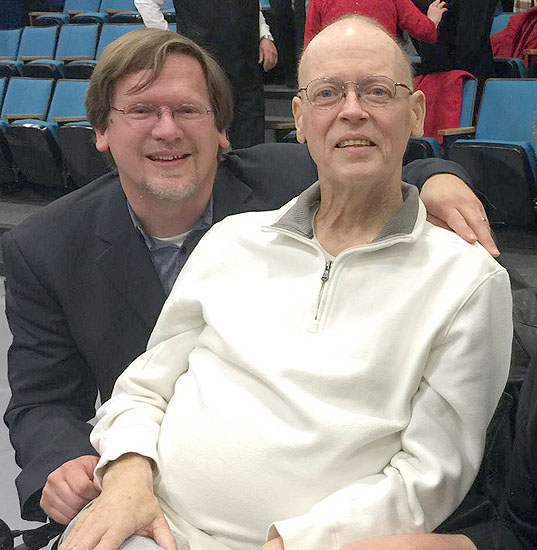 Now that I’m a dad of four kids (three boys and a girl), I have such a different perspective on stories like this. Through the years, whenever my dad and I reflected on that day on the 8th hole, he would always laugh with a little bit of What were you thinking!? in his tone.

More recently, I have been given a new perspective on a lot more related to dads and their kids. In November 2014, my father was diagnosed with pancreatic cancer, and told that he’d probably have six to twelve months left. After four sessions of chemo, doctors discovered that the cancer had almost doubled in size. Then on April 20, less than six months after his diagnosis, my father peacefully passed away in his sleep.

During those five months and twenty days, I learned more about fatherhood than I ever discovered in my previous 12 years of stumbling through it on my own. Though there are many things I could share, there are three perspectives that changed when I was losing my dad to cancer.

The Things We Remembered

It’s not surprising that when the diagnosis was terminal cancer, our family grew nostalgic. We shared a lot of stories about Dad and about our times together. I was intrigued by the stories we told. They were not stories about how much Dad spent on us or the extravagant places we went; they were stories about being with dad in ordinary life—at the kitchen table, on car trips, at church or on the golf course.

My most significant memories were the times I played basketball with Dad, sat around the campfire with him, or went to watch him play volleyball in his competitive league. It occurred to me that the most memorable moments I had with my dad were the times he just brought me alongside him and invited me into the things he loved.

I could probably father so much more effectively if I would just invite my kids alongside me as I do the things I love. Those moments are the most powerful moments I remember with my dad, seeing him and being with him while he enjoyed things that were worth enjoying. It causes me to ask, “What could I invite my kids into and create moments with them in my everyday life?”

What I Wanted from My Dad

During those last five months of my dad’s journey with cancer, I made that two-hour drive much more often than I had in previous years. He didn’t ask me to come down that often; I just had it in my heart that I needed as much time as I could get with my dad before he was gone. I wanted to hear his voice. I wanted to hug him. I wanted to learn more about his childhood stories and what he reflected on about life as he was facing death.

My thoughts weren’t about needing another trip with Dad or getting a gift from him. I wasn’t consumed with a list of things Dad had to do for me before he died. In those moments, it was clear: I just wanted to be with Dad. Nothing else mattered other than taking in those precious moments each day that I could. My dad continued to welcome me into his personal journey and just let me live alongside him as he did what he needed to do. Whether it was sitting in a chemo room or going out for lunch when he really couldn’t eat anything (he just loved to see the people), being with Dad created even more memories that are precious to me now.

And with my kids, there are times when I think I know what they want, and perhaps it’s really more about what I want for them. Doing life with my children will build my relationship with them and make memories more than anything else we can do together. I need to be careful not to be so invested in trying to give them the big things that I miss the everyday things they need from me. Those everyday things will mean the most to them when I’m no longer able to walk alongside them. Those are the things I treasure reflecting back on time with my dad.

What I Witnessed in My Dad

I have never been more inspired by my dad than when I watched his journey from diagnosis to death. He chose to live each day instead of die each day. He didn’t complain. He didn’t lament. He didn’t live in regret. He resolved in his spirit that he was going to grab every moment he could out of every day. He was going to enjoy his family, his church, his friends and former co-workers while he still had the chance. There were days he would venture out to see someone he loved, and that 60-minute outing would wipe him out for the rest of the day if not the next couple of days. But he was determined to not miss that moment, that opportunity. Even when we questioned his strength, he was determined to live life and not just die.

One of those days, I remember saying that I wanted to die like my dad, and it probably shocked some people. No, I don’t want to die of cancer, but I do want to live each moment to the fullest because I know my days are limited. I want to tell everyone I can that I love them. I want to take in every laugh. I want to relive every story. I want to enjoy the time I have with the people I love even if I am hurting or weary. I want to die like my dad because, for him, dying was about living the greatest life he possibly could with the time he had left.

My dad created moments throughout the 41 years we had together. Most of them were not big productions that cost money; they were just moments when he invited me to experience life alongside him. Those moments built extraordinary memories that I will cherish forever.

Today, as I learn to navigate life without my dad, I am so grateful that even when I did ridiculous things like throwing a golf club into the middle of the pond, he never stopped inviting me into moments with him. And now, I try to build moments with my kids that they will carry with them well beyond my lifetime.

Ryan Nelson is married and has four children. He’s a home inspector in the Kansas City area and roasts coffee to raise resources for non-profits with his family’s business, Grounds for a Cause. He and his family love hosting about 15-35 friends and neighbors for Family Dinner Night nearly every Thursday evening.