Priorities vs. Lifestyle, and a Really Cool Machine

A few years ago, a drawing by my 4-year-old daughter sparked a conversation that would spawn an app, start a business and begin reconciling our lifestyle with our priorities. (See the video below for more on the story.)

For most of my professional life, I’ve worked out of a home office. In the spring of 2012, I had a great opportunity to work with three of the most talented guys I know at a startup for one of the most successful creative businessmen I have ever known. It seemed like an opportunity worth the commute downtown. 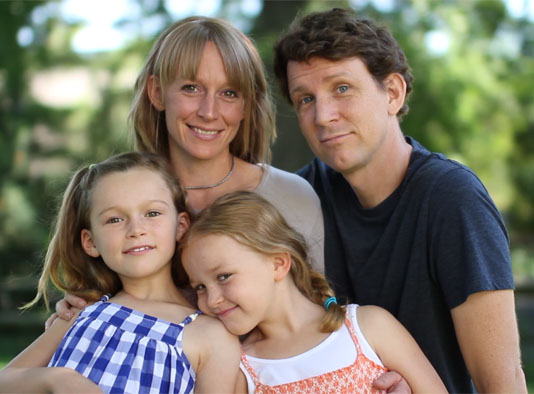 The only person who didn’t think this startup was a great idea was my daughter, Kalley. She wanted me to stay home. So she came up with a plan.

Kalley drew a picture of a machine. She took the drawing with her everywhere. She even slept with it. And we finally figured out why. She thought that if I would just build the machine she had drawn, it would make food, so we wouldn’t need money, so I wouldn’t have to go to work anymore. (I’m guessing at some point we had a conversation about daddy working so we could buy things, like food.)

It was cute. Especially considering that I am worse than useless with tools. But it also made me ache. She wanted our family to be together. I knew that was right. And it made me wonder where I had gone wrong.

The Stench of Compromise

Our family was just entering a new place in life. Diapers were over. We had summited the mountain that is the early years of parenting. We had clawed our way up Maslow’s Hierarchy of Needs past the survival phase and into that luxurious place where we could evaluate our family on a deeper level. And we didn’t like what we had become.

The perceived necessities of our lifestyle had overrun our priorities. We were quickly drifting into the sticky morass of organized activities and general busyness that ensnares the average American family. I was increasingly isolated from the rest of the family as I worked harder to provide. My wife Carrie was feeling pressure to sign our kids up for activities like ballet and soccer. Our life was fragmented. And it looked like it would only become more so.

The worst part for me was that I didn’t see any options. It’s like everybody we knew was caught in that same gravitational vortex of doom. This was just what it was to be an American family, right?

And it’s not like it was evil. The problem was more like this: if you had asked us what we valued as a family, we would have said things like: honoring God, developing our talents, being together or serving the poor. But if you looked at how we spent our time, you got a completely different answer. It smelled like compromise.

Around that time, we met some people who had made some pretty unusual lifestyle choices that they thought would better serve their families.

One guy wanted to live on the same street with a bunch of friends. The problem was that not every family who was interested could afford to buy houses in a ‘nice’ neighborhood. His solution: build the community in a ‘bad’ neighborhood where houses cost $35K. At that price, anybody could join their community without being financially hamstrung.

Another guy had a thriving business in the same building as my new startup. He didn’t like that employees had to spend all day away from their kids. So he made it a policy that you could bring your kids to the office. It was exactly as bizarre as you imagine to walk past their office space and see kids milling around with their parents.

Was it perfect? Nope. In fact, they were the first ones to tell you these were evolving experiments. But I loved how they focused on protecting the things that really mattered to them and let the lesser ‘necessities’ take a back seat. That set me free to imagine what our family’s experiment should look like. 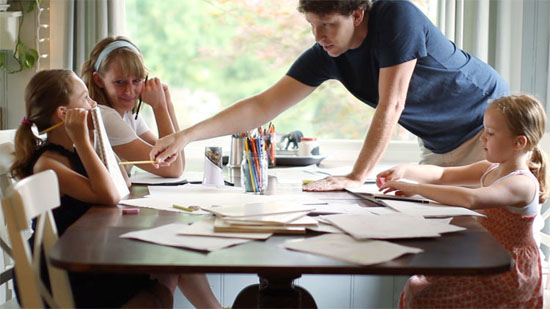 Into this swirl of new ideas came Kalley’s drawing. It had a lot of hilariously violent machine components that could create some fun interactions in a kids’ app. And apps can make money. I began to wonder if her machine could work after all—as an app.

And making apps was something we could do together as a family. It seemed like a great way to combine our talents. We all loved drawing. My wife writes. I had made some games. Why not?

So we started our own experiment: a story and game company called RocketWagon. And we worked together to make our first interactive story called “Kalley’s Machine Plus Cats,” which launched in the App Store this fall.

Was the experiment perfect? Nope. There were a lot of sighs, doubts, complaints, missed deadlines and instances of me asking my wife, “Do we really want to do this?” But there was good stuff too:

The best thing about doing an app together was that we were all united around a common goal. I had no idea how much our family needed this until we did it. But after experiencing it, it made perfect sense.

All my best relationships are with people I collaborate with. Sometimes the collaboration isn’t professional—it can be just kicking around our latest ideas. But I love building things with creative people. It’s why I love my long-time client relationships. We’ve crafted brilliant pitches together, braved impossible deadlines, pulled all-nighters, held off scope-creep. And those experiences have forged a deep loyalty. I want that with my wife and kids.

And really, I don’t expect anyone else to go start a family app business. At this point, I’m not entirely sure it even works. I tell our story because I was grateful for the stories of those dads I met who were willing to talk about their experiments with shaping their lifestyles around their priorities. They set me free to rethink some things I had accepted as ‘normal’.

So if you are feeling that tension between what you say you care about and how you spend your time, know that you are not alone. We are out here. Experimenting. Trying to bring it all together. 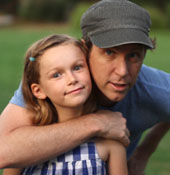 Jon lives in Cincinnati with his wife and two girls (7 & 9).