Messages on Mirrors: One Great Way to Affirm Your Daughter

I forget what age I was when I heard my first nursery rhyme, but there is one in particular that is burrowed deep into my memory bank like a steel nail into softened wood: “Mirror, mirror, on the wall, who’s the fairest of them all?”

This quote, as you probably remember, comes from the fairy tale Snow White. Every day Snow White’s stepmother would ask the mirror this infamous question. And though at first glance it might seem like a benign inquiry, I believe it powerfully illustrates the way a woman often determines whether or not she feels beautiful or adequate. She tends toward asking this power-packed question of inanimate objects, as if they were the judge and jury, be it a mirror on the wall or the number on a scale or the size marked on the back of her jeans. No human interaction necessary.

I’m sure you know the way this fairy tale ends. One day the mirror conclusively announces that Snow White is indeed the most beautiful woman in the land, thus leading the wicked queen to plot the murder of her own step-daughter. (Isn’t it crazy to think that stories like this are told to impressionable little children where hatred, betrayal, and murder are presented as normal and acceptable?! Yikes!) 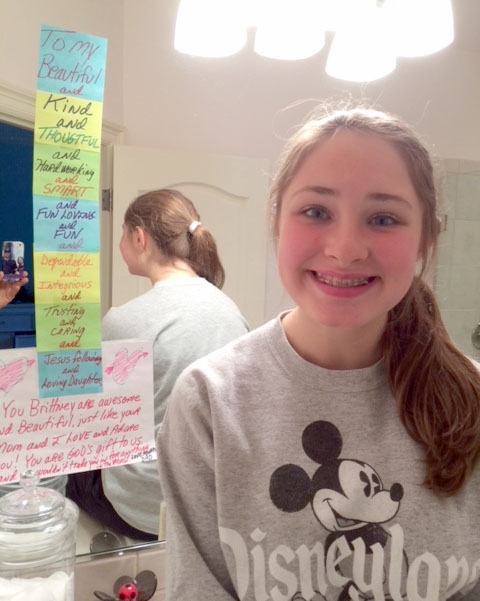 Here’s Brittney sitting next to the messages that her dad, Dan, left on her bathroom mirror. He regularly writes to her now and reports that she never takes them down.

This story leads me to pose the question: What impact does this tale have on young girls as they absorb the subliminal message that beauty is determined by something outside of themselves with whom there is no healthy relationship?

Even more concerning is the way this story demonstrates how easily an influential woman (the queen) gives away her own opinion and succumbs to feedback from a mirror over that of herself or another human being with whom she has a positive connection. In modern terminology, this translates to a woman “listening” to the definitive messages from magazines, television, and movies (a.k.a. mainstream culture) as the ultimate determiner of beauty. Inanimate objects are at the helm once again, not so different from the fairy tale your daughter may have once heard as a little girl.

The truth is that your daughter is asking this same question every single day of her life: “Am I beautiful?” She longs to be told she is beautiful, and she will keep asking and looking until someone tells her that she is.

She needs you, dad, to answer her question. If she doesn’t hear it from you, she will find another “mirror” on another wall who will tell her that she is beautiful. Sadly, some of those mirrors have a hidden agenda, and will express what she wants to hear in order to get or take something from her.

But you have no other agenda than to let her know that you see her beauty fully and completely. She will never tire of hearing you tell her the good things you see when you look at her. And over time, she will internalize your view of her. Trust me on that.

Here is how a dad named Rick said it to other dads at one of our meetings for The Abba Project: “We’ve got a job to do, men. We need to reinforce what we see in our daughters because it counters what society is telling them as women.”

The truth is that you are a mirror to your daughter, and that truth invites the question: What kind of mirror are you?

So give her specifics about what you see in her that is beautiful. And be sure to use that word, “beautiful.” As I interact with daughters—and without any prompting on my part—that’s the word I hear again and again as being important for them to hear from their dads.

Include your observations about her outer and her inner beauty. Think of them as two sides of the same coin, adding value while serving as complimentary counterparts. She needs to hear you address the entirety of how you see her.

And if using the word “beautiful” is new or uncomfortable for you, try writing it to her first until it becomes a part of your vocabulary.

Dad, stand up as a warrior and fight for your daughter. It’s brutal out there and she needs you to do battle for her so she can see and believe the positive truth about herself.

Dr. Michelle Watson has a clinical counseling practice in Portland, Oregon and has served in that role for the past 17 years. She is founder of The Abba Project, a 9-month group forum that is designed to equip dads with daughters ages 13 to 30 to help them focus more intentionally on consistently pursuing their daughters’ hearts. She has recently released her first book entitled, Dad, Here’s What I Really Need from You: A Guide for Connecting with Your Daughter’s Heart. She invites you to visit drmichellewatson.com for more information and to sign up for her weekly Dad-Daughter Friday blogs where she provides practical tools so that every dad in America can become the action hero he wants to be and his daughter needs him to be. You can also follow or send feedback on Facebook and Twitter.