Teaching Kids to Be Responsible

Dad, here are two tips for teaching kids to be responsible when they’ve messed up.

Michael’s preteen son came home from an event with friends, and Michael heard him crying in the kitchen. Pretty soon the boy confessed: “I lost my phone.”

That phone was a Christmas gift just a few months before, and he loved it. But he’d left it on a table and asked his friends to keep an eye on it while he went to the restroom. It wasn’t there when he returned. 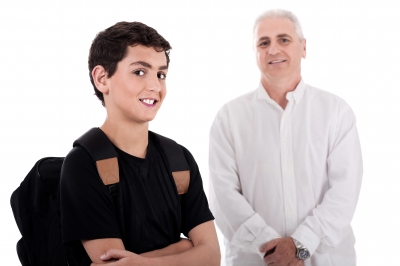 Of course, Michael wanted to say: “You did what!? Why did you set it down? That’s about the dumbest …. Do you know how much that cost?”

So how do you go about teaching kids to be responsible when they already know they’ve messed up?

1. Start by reinforcing your love.

First things first, let your kids know that you love them. As dads, many times we immediately focus on the cost, or dive in with logic and say, “You should have done this or that.”

But that isn’t what our kids need first. They need to know we’re still there for them and everything is okay. And yes, we still love them.

And although it wasn’t the first thought that occurred to him, Michael took a deep breath, hugged his son and said, “I love you. These things happen.”

2. Later, when things have settled, use it as an opportunity for teaching kids to be responsible.

Resist the temptation to swoop in and bail your child out of mistakes. Michael and his wife didn’t bail their son out of his predicament; they didn’t run right out and buy him the same phone.

Michael told him a story about how he let a high school buddy borrow his new Nikes for gym class. The friend left the shoes out while he was in the shower, and someone took them. Michael’s family couldn’t afford another pair—or maybe they were teaching him to be responsible—so he wore beat up shoes that year.

Michael told his son, “If you want a phone like that again, you can save your money for it. For now you can use this old one of mine. Sometimes losing things helps us learn to take care of what we have. But it’ll be okay. You’re learning from this.”

Michael didn’t have to get loud or pile on the humiliation. He could just be on his son’s side and love him. And Michael and his wife agreed that the money they spent on the phone wasn’t wasted because it created a memorable opportunity for their son to learn a lesson or two.

Do you have any stories about teaching kids to be responsible? Please leave a comment on our Facebook page.