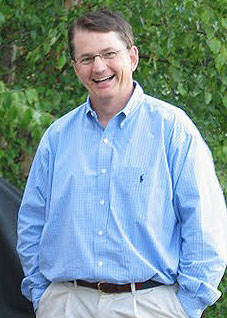 Peter J. Spokes was an inspiration to all of us who have a passion for fathers and families. At the National Center for Fathering, Peter served as executive vice president from 1994 -2006 and president and chief operating officer from 2006 until his death on May 24, 2010. Peter was a key figure behind multiple initiatives, including Fathering Court and Championship Fathering.

Peter was born December 30, 1952 in Minneapolis, MN, to Janet and Peter Spokes. He graduated from Edina High School. He received his BA from Yale University and his MBA from Stanford University. Peter was employed at General Mills, Inc., for over fourteen years and was a Vice President in consumer product marketing.

In 1994, Peter joined founder Dr. Ken Canfield to help guide and direct the National Center for Fathering. Among his many contributions, Peter greatly influenced the development of NCF’s website, fathers.com, and he was a key player in creating the nation’s first Fathering Court program for non-custodial fathers in Kansas City.

Peter was a respected national advocate for fathering and the fathering movement. He served on the National Conference of State Legislator’s Advisory Committee on Responsible Fatherhood, the National Fatherhood Leaders Group, and, most recently, on President Obama’s Advisory Council on Faith-Based and Neighborhood Partnerships Task Force on Fatherhood and Healthy Families. Besides his passion for helping dads, he also had a heart for the fatherless and was a father figure to many beyond his own children.

A loving husband, devoted father, good friend of many, and a man of obedient faith in the Heavenly Father, Peter is greatly missed by all who knew him. He left a legacy of love, faith, and family, which includes his wife of 34 years, Barb, and his six children: Pete (wife Lynnette), Erin (husband Pepe), Megan, Annie, Charlie, and Tim.

Thank you for remembering and celebrating the life of Peter Spokes. We invite you to make a renewed commitment to involved, responsible fathering, the cause to which Peter devoted so much time and energy during his lifetime.

Peter’s family is still committed to the work he began here at NCF, and they would appreciate a donation in his honor to help the National Center for Fathering carry on the work of inspiring and equipping men to be the involved fathers, grandfathers and father figures their children need. You can make a donation here.