Create a Satisfying Summer with the Kids

Phil Holman wanted to be “the Disneyland Dad.” It was his first summer since the divorce, and the Michigan father of two had planned a whirlwind experience for his young sons: amusement parks, zoo trips, baseball games, the state fair, and evenings at the movies.

It didn’t work out. With school over, the last thing his kids wanted was a schedule to meet. To them, a good summer consisted of a well-stocked refrigerator and lots of time with their friends.

Holman eventually learned his lesson. One of millions of divorced fathers who get custody of their kids each summer, Holman eventually realized that his kids needed nothing more than a father they could trust. 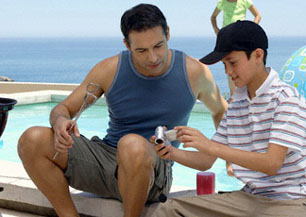 He’s learned a lot more too. Below, Holman and three other experienced “summer dads” offer practical suggestions on how to make summers with the kids a satisfying experience that can also help heal the wounds of divorce.

“At the beginning of the summer, we’re all establishing our territories,” says Charles Metzker, a Kentucky father of two sons. “It takes time to find the comfort zone.”

Metzker says it may take anywhere from three days to three weeks for the summer routines to become established. To make the transition easier, he suggests talking with the kids on the phone before they arrive about what activities they’re interested in, and what they can expect from day-to-day life at their father’s house.

“The moms can really help in this,” Metzker says. “I have a good relationship with my ex-wife, and she makes a big difference by building up positive expectations as the kids prepare to come live with me.”

Some fathers make the mistake of taking off huge chunks of work time in the summer, only to find that their kids would prefer to do things other than hang out with Dad.

“While their parents are important to them, kids don’t want constant attention, especially as they get older,” Holman says. Holman’s kids “want to sleep over at their friends’ houses, and spend a lot of time on their own,” he says. “I’m always reminding myself not to hold on too tight.”

Holman suggests that fathers may want to reduce their daily work hours, and take some vacation. But they also should try to maintain most of their ordinary routines.

Amusement parks and state fairs are fun, but such entertainment also may promote a distance between parents and children, according to the summer dads. Hiking, canoeing, building tree houses and other outdoor activities, on the other hand, tend to promote closeness.

Henry Tyszka, of Michigan, took his son and daughter camping when they lived with him one summer, and they’re still talking about it, he says. “We all found hiking sticks, and put blue jay feathers on them,” Tyszka says. Now, “those sticks are waiting in the corner … for the kids to come back.”

Tyszka also found that his two daughters, who live in a big city most of the year, had rarely been to the countryside on a clear night. “One night, we grabbed a blanket and laid down and just looked up at the sky,” he recalls. “In my mind, I gave my kids the stars.”

TREAT THEM AS INDIVIDUALS

Most kids like to spend some fun time alone with their father. Metzker says that through the years, he’s asked friends and relatives to help with child-care so he can be alone with one child at a time.

His boys, he says, act very differently when they’re one-on-one with him. “They don’t have to perform or sulk to try to get my attention,” he says. “So you have the true flowering of the kid’s personality.”

“There’s a point where you start to … feel the pain of the separation,” Metzker says. The kids feel it too, he says, so it’s important to acknowledge what’s happening, and to say good bye in an intentional way.

Metzker often does it by saving a special trip for the end of the summer. He’ll also drive his kids back to their mother’s home, which is several hundred miles from Metzker’s home. Holman says that on the weekend before his kids head to their mother’s house, he’ll usually sit down and talk about how things went, and what each person will carry with them through the year.

“It’s a lot like a grief process,” he says. “The tendency is to ignore it, avoid it. But I think it’s best to recognize it, and take it as a rite of passage.

John Davis, A California father of two sons, says that the summer’s end is “probably the worst part about being divorced, knowing you’re not going to see your kids for awhile.” But, he adds, “I also have some feelings of relief. Part of the challenge in life is keeping a balance, and there are some advantages in being a part-time parent. It’s a bittersweet situation.”

Reflecting on their summers, almost all the fathers say their relationships with their kids changed radically from their marriage days. They also tend to change a lot from one summer to the next.

“After the divorce, I found out what being a parent is really about,” Davis says. “When you’re in a traditional marriage, it’s real easy for fatherhood to be a fairly plastic role.

“But when you’ve got your kids alone, you’re going to learn to be a more complete parent. It’s more intimate because you’re more responsible. When my kids were ill, I was their nurse. When they were troubled, I was their confidante.

“You have to make the commitment that your child is a priority in your life, and you’ve got to make the adjustments,” he says. “If you don’t, you’re going to lose the depth of connection.”

Neil Chethik is author two books, FatherLoss: How Sons Deal With the Deaths of Their Dads (Hyperion) and VoiceMale: What Husbands Really Think About Their Wives (Simon & Schuster). He offers keynote speeches throughout the country. He is married, the father of one son, and lives in Lexington, KY. He can be reached at neil@neilchethik.com, or through his website, www.NeilChethik.com.