Is it possible to be a great father as a single dad? The short answer is, “Absolutely!” However, since being a single parent brings a variety of outside factors and dynamics, we may have to take a slightly different approach. It will surely look different for single fathers. 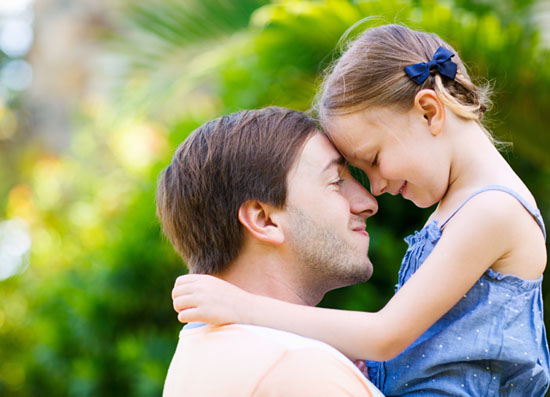 Whether you have full or partial custody of your children, single fatherhood brings some level of brokenness. Perhaps there was a divorce, a broken relationship, or the loss of your spouse. Either way, I get it. I was a single dad for over nine years; and even though I recently married, I still experience many of the same challenges I did beforehand. Regardless of what sort of custody or living arrangement you may be in, there are some things you will not be able to control. Still, I’m convinced that we can all find ways to live out the three pillars from Carey Casey’s book, Championship Fathering:

Loving
I was never married to my daughter’s mom, and honestly, before my daughter was born I was one selfish son of a gun. I was always looking out for number one and left a path of destruction in many areas of my life. Then I became a dad.

Granted, it wasn’t an ideal situation between my daughter’s mother and me, but I was determined not to let that hinder my ability to open my heart to the new role I had just stepped into. I seized the opportunity with both hands and although there were plenty of learning curves along the way, I still stand in awe at how a beautiful baby girl could melt the heart of such a tough guy.

Whether we are married or single, there will always be someone or something vying for our children’s hearts; but we must be the one protecting their hearts. Perhaps you have the blessing of tucking your kids in and kissing them goodnight every night. Please don’t ever take that for granted. I know plenty of dads (myself included) who would love to be able to do that. Or maybe you are parenting from long distance or with minimal time. You can still make the effort and find ways to show your son or daughter how much you love them. I know one single father whose children live in another state and he has very little time with them. Yet he persistently sends them emails and letters, despite almost never receiving a reply. He hopes one day his children will look back and see that their dad never stopped loving them, no matter what. You may be on either end of the spectrum, or somewhere in between. The point is to grab those moments when they arise, because we can never stop loving on our kids!

Coaching
My high school basketball coach was really more like a drill sergeant than a coach. We ran before, during, and after practice. He was notorious for breaking at least one clipboard per game, and outside of the starting five, perhaps only a few other guys played on a regular basis. Yes, we always had winning records, but when it came to coaching and investing in his players individually as people, he fell way short. Looking back, I can see that I definitely felt neglected in multiple ways when I played under him.

Years from now, if your children were asked about how you invested yourself in them, how do you think they would respond? Most of us are already stretched thin when it comes to quality time with our children, and single fatherhood may magnify that even more. Still, we can be intentional about teaching our kids about life. It could be areas such as work and study habits, household chores, or how to respect others.

One way or another they will grow up, and a good part of their success in life will be based on what and how we invested in them during the early years. Single dads may actually have some advantages here because many times we get undivided father-child time. If we keep our eyes, ears, and minds open, we can see plenty of coaching opportunities in front of us on a daily basis.

Modeling
The three pillars all work together. The patterns of how we love and coach our children—and how we live in general—create powerful and lasting impressions on them. One of the best examples I can give here is how we treat their mother. (Touchy subject I know, guys, but hang with me.) Our kids definitely feed off our actions towards their mom, even if it’s not evident immediately.

I’ve been on the receiving end of multiple attacks and verbal assaults, and I admit I often fell short on how I responded during those moments, especially in the early years. But today is completely different. My daughter regularly hears me build up her mom (and stepdad), and if I don’t have something nice to say about Mom at the time, then I don’t say anything at all. I’ve had to take the back seat in many compromises, but it’s also been returned to me along the way too.

Bottom line, when we teach our children to love and honor their mother (and others) through our own actions and words, we are setting a huge example. We’re showing our sons how a man is to treat a woman, and demonstrating for our daughters how they should expect to be treated, and that they are worthy of being treated right. And as you probably know, this applies to multiple areas of life, such as the way we manage our finances and our homes, or how we handle adversity. Fathers who are strong, positive role models help to build strong and confident sons and daughters.

Those are the “pillars” applied to single dads, but if there’s one idea that captures the essence of being a single dad, it’s this: Press on. Based on my experiences, the life of a single dad seems to be always going into, in the middle of, or coming out of some sort of test or storm. But we can’t let the storms defeat us. We have to continue to press forward, because that’s what our children need, and that’s what committed fathers do. We love, coach, and model for our children no matter what we are facing personally.

To use a weightlifting analogy, “Resistance equals growth.” If you want to get bigger, faster, and stronger, you need to put in the time and hit the weights—overcome the resistance. The same is true in single fatherhood. We are bound to hit plenty of resistance, but with enough training, the proper “nutrition,” some good spotters in our lives, and the right game plan, the trials and circumstances that were once too heavy to lift become easier because we are more conditioned to handle the weight.

Make no mistake: as a single father you surely are capable of being a great dad.