There are many fulfilling things in life, but being a dad takes the cake. Honestly, I never thought I would ever be so blessed as to be the father of five sons—that’s right, five boys! It’s part coaching, part military, and a whole lot of chaotic fun.

My story and my journey as a father are somewhat unique because I have all boys, but more than that, because my oldest son, Kellen, who is now 10, is a cancer survivor. And I would never say that I have handled the various challenges perfectly, but there are some important things I have learned along the way, and I hope you will benefit from them too: 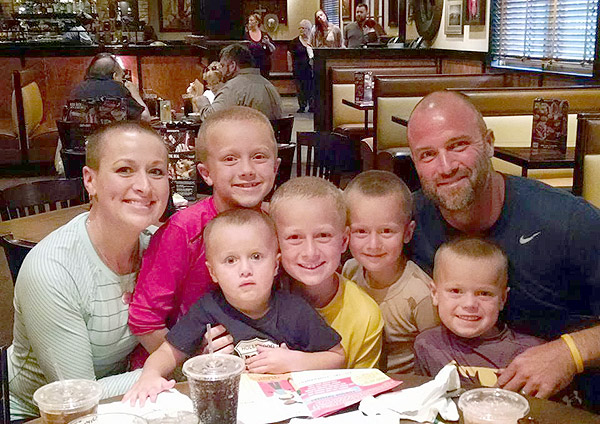 Don’t let it take over your family.

Kellen was diagnosed with Leukemia when he was three-and-a-half, and at the time he had a younger brother who was one. “Shocking” doesn’t do justice to the news we received, but it quickly became our reality. And we were determined to not let it slow down our family.

We caught our breath, did a crash course in cancer 101, and made some necessary adjustments. Then we tried to roll all our energy toward becoming and remaining positive. Childhood cancer is a harsh reality, and we definitely respected that threat; the thought of losing our son was ever-present. But we knew we couldn’t let it get the best of us. We stayed focused on getting our son healed, healthy and happy. Together we would dominate this challenge.

Don’t stop being a parent.

Kellen’s treatments began immediately, and our lives became a roller-coaster. The side effects were very hard on him, and on our entire family. Thankfully, our doctor and his staff prepared us for what may happen. Probably the best advice we received was about handling discipline issues with him. The nurse practitioner told us, “Whatever you were doing, keep doing it. Don’t let your guard down because of what may be brought on by the side effects. Stick to your guns.”

As a dad, it was so tough to watch what the medicine was turning our son into—sometimes he was such a monster. So often, we felt sorry for him; we wanted to ease his pain and let him act however he pleased, even if it made things difficult for everyone else. In some ways that would have been easier for us at the time. But we took the approach that he and our whole family deserved something better, and so we held him to a higher standard and stuck with it. It was never easy, and there were many tiring and stressful days—like many areas of being a dad. But now we can see that it paid off. Kellen not only survived the cancer, but he became a really great kid.

I knew I had a big job to do: protect my son and get him healthy. That might sound like I was strong and in control, but I wasn’t. I quickly learned that I couldn’t handle it alone. Family and friends were major sources of support along the way. During the three-year treatment protocol, we received meals, gifts, donations, and best of all, some free babysitting. It was so amazing to see a team of people who were eager to lighten our load a little bit, and being able to take short detours from our reality of cancer was greatly appreciated.

I must also say that my wife is a saint. Through the ups and downs, we found ways to be good teammates—comforting and encouraging each other and helping each other become better people. A strong marriage will be a huge advantage during whatever difficulties may come your way.

One morning when I was sitting with Kellen at the hospital, my wife walked in with a little stack of pictures. Twins! We had just doubled our kids. Several weeks later, we found out that both babies were boys. Maybe that doesn’t seem that amazing, but at the time, I was overwhelmed at how blessed I was: one son winning his battle against cancer, the other healthy as can be and providing lots of distraction and comic relief (what cancer families call a SuperSib), and then twins on the way.

We continue to celebrate miracles. August 26, 2011, was Kellen’s final day of treatment, and has become what we call “Domination Day.” We celebrate it like a birthday because it means we get to have more birthdays with my oldest son. Later that year, Kellen received a Dream Factory wish trip, and we all went to Orlando. The day we returned, we found out son number five was on the way. All children are miracles in their own way; we must never take that for granted. Maybe it’s just a matter of perspective.

Be a devoted dad.

I am so proud to tell people I have five boys and then watch their reactions. They are certainly healthy and active boys. Most nights at our house it’s somewhere between UFC and the NFL, but I wouldn’t have it any other way. Sometimes “organized chaos” is where things really get fun!

Although my fathering journey is somewhat unique, I have tried to view each challenge as an opportunity to take my fathering up to a whole new level. For example: