Isn’t it amazing what fatherhood can do to a man?

One great example comes from a recent documentary with a fantastic fathering message … but that we cannot recommend wholeheartedly. It’s called The Other F Word, and it follows the lives of a handful of long-time members of the punk rock culture—including skateboarding legend Tony Hawk—who are also dads. 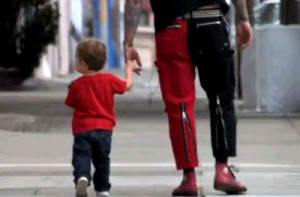 “Maybe punk rock was never meant to grow up,” one of them says, “but it did.” Now as fathers, these men wrestle with the need to reconcile the wild, profane, and anti-authoritarian life they have promoted for years in public, with the need to be positive, responsible role models for their kids.

“How do you explain that to a four-year-old,” another one says while pointing to a suggestive tattoo on his arm.

This fascinating film is described as “a raucous, eye-opening, sad and unexpectedly wise look at veteran punk rockers as they adapt to the challenges of fatherhood.” You can watch the trailer below.

NOTE—other than the film’s title, the content of this trailer is fine for all audiences. But the full-length film, which you can watch online, does have quite a bit of R-rated profanity.


Not many of you reading this have been living like punk rockers for years and years, and now you’re facing big decisions about life changes you may need to make for your kids. But every dad brings his own habits, preferences, and quirks with him into fatherhood. And like these guys expressed, some of you didn’t have great dads to show you how it’s done and challenge you to be responsible.

It’s likely you can empathize at least a little with the men in this film, because being a dad probably changed you in some ways, too. Fatherhood changes all of us for the better.

It’s a common phenomenon for dads … That first new baby holds a powerful fascination for a father. That’s why a man in his mid-twenties, eager to make his mark in the world, will make it his business to spend thirty minutes securing the baby carrier in the back seat of his sports car. (And he’ll drive more carefully.) That’s why, before long, he’ll trade in the sports car for something more practical. And that’s why he will likely become more sensitive, more responsible, and probably reign in some career ambitions so he’ll have more time and energy for home.

Being consistent and reliable as a father are important parts of our modeling for our children. They find security when we’re predictable in our moods, habits, and schedule.

And we should recognize that, for the right reasons, change makes sense—like when we recognize that our child has a specific need that we’re not meeting, or when we recognize a destructive behavior pattern in ourselves. It could be explosive anger, emotional withdrawal, using profanity, some overbearing personality trait, or simply awareness that we’re not living out the kind of character that we want to demonstrate for our children.

When you do become aware of those areas or habits that might not be the best, take whatever steps are necessary to change—for your kids’ sake. They’re worth whatever adjustments we’re asked to make.