Be the Good Boss

A big stumbling block for fathers today is discipline. Some choose to avoid it altogether, while others struggle with what is appropriate. What do you do from day to day, moment to moment? One of the things I’ve noticed over the last twenty years is that fathers’ confidence in discipline has suffered. Fathers are tentative when it comes to exercising discipline and, when they do, they tend to bring a pretty weak effort.

This has come about for a couple of reasons. Today, fathers have to spend so much time outside of the home that we feel guilty about it. Also, some want to be our child’s friend first a foremost. In addition, it seems like the rules for being a father have changed over the years, and it is hard to know if you are being too hard on the kids. The tendency now is to maybe err on the side of Yes, when in the past No was the default. The issue here is that a bad Yes is much, much worse than a bad No. 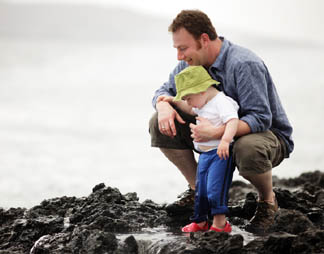 We need to look at this challenge not as one solely about discipline but about leadership, because if you just try to be the disciplinarian without building a foundation where your child trusts and respects you, it will end in failure.

Now, leadership can be an imposing word. A dad once said to me, “I don’t want to save the world; I just want to keep my kid out of trouble!” I assume most dads agree with that statement, so let’s work with something that anyone who has ever held a job understands: Fathers need to be the boss. Actually, I need to be more specific here. Fathers need to be the good boss, not that bad boss who screams and everyone ignores. That bad boss only worries about being the tough guy and not a leader, so we are going to focus on what we need to do to be a leader and good boss. Below are three tried-and-true attributes of a good boss:

Learn How to Say “No”

One of the most frustrating things about bad bosses is that even though they scream and yell, they don’t like to make decisions. A good boss, on the other hand, is always willing to stand up and make the tough call. When it comes to being a father, this boils down to the very hard task of saying “no” to your child. This is certainly not a new concept. My mother-in-law would patiently wait for my wife to make her pitch when she was a little girl and then politely tell her “no.” The few times my wife attempted to continue the negotiations, her efforts were met with a much frostier and final “no.” My wife never tried a third time.

So, why is saying “no” important, when it’s much easier and everyone is much happier when we say “yes”? The reason again is that children have to have boundaries set for them. If you don’t set boundaries for your kids, it’s not like the boundaries won’t exist. It is human nature to find the boundary, and children are indeed humans. Setting these boundaries is not an occasional thing either. It is a constant, daily exercise as thoughts pop into your child’s mind. Over the next few days, count how many times your child says, “Can I…?” Every time we answer that question, we are setting a boundary, so it is something we have practice at. It gets tough, however, when that shining little face doesn’t like the answer. From that point until the child is in his or her late 20s, life will be one long negotiation. If, like the bad boss, we don’t step up and set the boundary when given the chance, then it will be set down the road in a much more painful way.

So, how do we get the No train back on the track after years of giving in when we shouldn’t have? This, of course, is much easier said than done. While this seems a daunting task, the most important question to remember is, What best prepares your children to face the world ready to succeed come their eighteenth birthday? This is usually very different than what will make them happy today. A father’s primary responsibility is the former, not the latter. Just as a good boss needs to make decisions based on what is best for the business, fathers need to make decisions on what is best for the child, not what will make him happy. Just as a good boss is responsible for the business running correctly, a father is responsible for the person his child is now and for the person he or she will be at age 18. We need to focus on preparing them to make the right decisions and to act the right way when they hit the doorstep of adulthood and become responsible for themselves.

Say What You Mean and Mean What You Say

This translates directly to the father/child relationship. When we fathers find ourselves raising our voices or getting angry because we are being defied, we need to realize we are being defied because the children don’t care if we get angry or not. It’s when we get so angry we actually do something that children will take notice. What we need to do, as Theodore Roosevelt said, is speak softly and carry a big stick, with that “big stick” being something the child cares about. If a child isn’t doing what he has been directed to do, a favorite toy needs to be put on the shelf for the afternoon, or an activity needs to be canceled. We need to take the time to find what small things will get a child’s attention when they are deprived of them, and use those things to shape behavior.

Use Encouragement and Rewards to Get the Behavior You Want

The bad boss never has anything nice to say, and you only get a raise because everyone gets a raise. The good boss, on the other hand, mostly has nice things to say and makes sure to tie a raise or bonus to something you did. For parents, once we have saying “no” and meaning what we say down, using encouragement and rewards will help you get the behavior you want.

Encouragement is something that is both free and easy but, sadly, it’s very rare. When you see your child do the tiniest thing the right way, you should be right there telling her that. We tend to do the opposite. We tell them when they’ve done something wrong or bad, but fail to acknowledge the good. If we flip that around and start encouraging the good and keeping quiet with the bad, we are accomplishing the same thing but in a much more positive manner. Since encouragement is a lot more enjoyable than silence, children will strive to do the things they know they need to do to get that pat on the back.

Dad, be the boss. The things discussed here will not happen passively. Fathers need to step up and take ownership of being the boss. Once you’ve taken ownership, you have to be relentless. Rest assured, your children will be relentless and try to break you. As we have said, life with a child is one long negotiation, and you can never give in. Stay frosty!

Once these things are in place, the results can be very rewarding. Getting your children to act and behave the way you know they need to without screaming your head off is a very good thing.

John McPherson Jr. is the author of Ten Simple Rules for Being a Better Parent in a World Turned Upside Down, which is available at Amazon and at John’s website: tensimplerules.net. John and his wife have two children and live in California.