John Schneider: From Dukes to Being a Better Dad

October Baby is now in theaters. It’s a powerful movie about eighteen-year-old Hannah, an adopted daughter. You can find out more and watch the trailer here.

It isn’t until halfway through that we find out other unusual circumstances about Hannah’s past that have made her life extra challenging. And, oh yeah, her parents have kept that information from her all these years. So she sets off on a journey to uncover the truth about who she really is.

Although fatherhood is not the central theme in the film, there is a compelling plot line involving Hannah and her dad. That father is played by John Schneider, from the iconic 70s TV show, Dukes of Hazzard, who has been involved in numerous TV shows, movies and music projects through the years.

During an exclusive fathers.com interview with John, he commented on October Baby, his fathering and family life, his career, the men who have been role models to him, and many other topics. You’ll appreciate and possibly identify with what he’s learned as a father. You can read the full interview here.

For this blog, we’re simply passing along a few of his insights. You’ll find that this “Hollywood actor” is very thoughtful and intentional about his role as a dad. (And you’ll notice plenty of “Action Points” that you can use along the way.)

I’ve done a lot of things, and I honestly have found nothing as frustrating in life than that period of time when your teenager daughter thinks you’re an idiot. And it happens! It just happens, and I don’t know why.

I’ve said this to my kids many times … “One of the biggest differences between me and you is that I’ve been seventeen, and you have not been fifty. So your perspective is very narrow, very short. It is your perspective, and I’m not going to discount it, but my job as a dad is … if I’ve sat on a stove that you’re about to hike your butt up onto, my responsibility is to let you know it’s hot. I’m not going to keep you from sitting on it, but I’m going to let you know that it’s going to hurt when you do.”

… It pains fathers when their children go through that “Dad is an idiot” stage. It really pains them. It’s not just confusing, it’s hurtful. But the good news, dad, is that it does have a shelf life. They do love their dads through all that stuff too, they just don’t let you know it. But later on they do. I used to tell friends of mine, “Don’t worry. They turn back into people just as magically as they turned into aliens.”

On the importance of modeling:

… With Leah, who’s twenty-seven, I used to open the door for [her] all the time. And it was cute when she was little, and then when she got to be about fourteen, it drove her crazy that I would open the door of the car. “Dad stop that. You know I don’t like that.” And I said, “Well, I can’t help it. It’s how I was raised, and you’re just going to have to deal with it. One day you’ll understand.” “No, I would never, I would never…” She’s had her current boyfriend for almost two years now. And the first thing she said to me when I found out she was falling in love with someone. She said, “I have to tell you something, Dad…. He opens the door for me, and I like it.” What a wonderful thing! It made my life! So, it took more than ten years for me to hear that, but it was worth every second of waiting for it.

On the art of the apology:

… They’re going to see bad stuff in you. We all do bad things… But there are things you can do intentionally. You can open doors for people, you can be polite, you can apologize. It’s a wonderful thing for a child to hear their father apologize to someone for something, or even better, apologize to them. I’ve apologized to my kids for stupid things I’ve done for as long as I can remember—and not right away, because I’m pretty stupid. But I will come to them a couple of days or even a month later and say, “You know, when I did that thing, I was wrong and I’m sorry.” And there’s power in that.

On the importance of good parenting:

Everybody likes to say that kids are so different today, but really I don’t think they are. There are more temptations and more cell phones and all that kind of stuff that has changed the dynamic a bit, but I think inside we’re all people who want be respected and want to be admired and want to matter. And if we can let our kids know that they matter, I think we’re way ahead of the game. And I think that worked a hundred years ago, and fifty years ago, and it’ll work tomorrow. 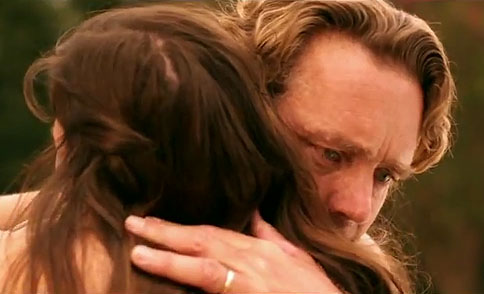 And John’s advice for dads: