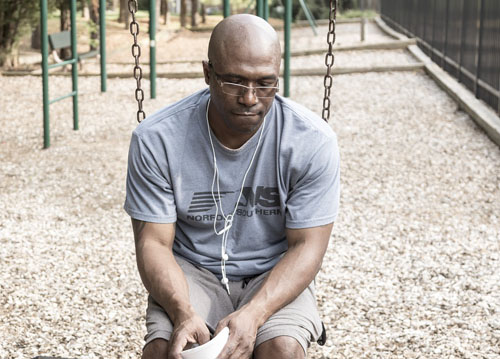 I didn’t talk about it anymore until 4 days later when Keisha sent another message from Uncle Barney letting me know that Bobby wanted to speak with me and shared the phone number to his hospital room in Florida. I contemplated … and then made a decision. I figured as a growing Christian and as a man with morals that I couldn’t let another human being die without honoring a simple request to hear my voice.

So I decided to call Bobby to hear him out. The hospital phone rang and Bobby picked up. “Is this Bobby?” I said, knowing that it was him but not quite sure on how to greet him. After he confirmed, I proceeded to ask another obvious question, “How are you doing?” I knew the answer but waited for him to respond. “Is this Rashad, my son?” Bobby replied in a voice of dejection.

Surprisingly the conversation began. It was nothing like that one time I talked with Bobby after graduating from college. I remember us being on the phone and him telling me how proud he was of my accomplishment. I think I said “Thank you.”

Anyways, Bobby explained that the doctors found cancer which had spread throughout his entire body and was only giving him a few months to live. He then transitioned the conversation to what was certain to be discussed. I barely understood him as Bobby told me that he was sorry for not being a father in the lives of his children.

He talked about how much he regret every minute of his absence and that he wish he could have at least made an effort to reach out to us. He spoke about the Bible and how he knows that the Lord will forgive him for all of his wrongdoings. Then he said, “The most important thing is for my kids to forgive me for everything that I did and did not do.” I listened a little longer and my mind began to race. I was trying to minimize two decades of questions to ask in one phone conversation.

The first question was obvious. “What made you decide that you wanted nothing else to do with your kids?” His answer was simple to him but complicated to me. He blamed it on the drugs that he had been using for the past thirty years. He said that it took over him and all of his thinking. It turned him into something that he wasn’t and he couldn’t resist.

I didn’t really buy it but I figured he had nothing else to blame his absence on so I proceeded to the next question. This question required courage because it’s something that I don’t like to speak about. “Is it true what you did to Keisha? Did you molest her when she was young?”

As expected, he denied what Keisha had been shamefully and resiliently speaking on for the past five-plus years. He claimed that he had “no recollection of doing anything like that” and he said he would “rather die or be murdered than to do have done that.”  I didn’t believe him and hoped for the truth.  I told him that it’s something that he’d have to take up with the Lord when it’s time to depart this earth. And I moved on.

But then suddenly I began to cry and didn’t know why. I knew it wasn’t me expressing emotions because of his physical state — I was simply unbothered when I saw the text message.

Trying not to send him to an even earlier grave, I gently exploded like a 50-cent canned soda, telling Bobby that he had ample time to reach out to me but a “hit” was more important than a “Hi.” I told him how he missed out on the success stories of two dynamic children who recently connected with the other lady’s kid he tossed 40 years ago, my lovely half-sister Shon.

I angrily expressed my feelings about having no expectations of what a father is or does because it was the norm for my peers not to have dad at home. I assured him that he wasn’t the only man in the world who made the mistake of not having a relationship with his offspring.

I made it clear that while he blatantly disrespected my mother Thelma and left her to fend for herself, she never made us ignore the fact the he was still our father. “I don’t hate you nor dislike you,” I said, and then I restated his point, “For everything you did and did not do, I forgive you.” And then I asked him if I could pray for him.

After prayer he continuously mumbled, “I’m sorry,” and told me that he knows God will forgive him and that he is praying that Shon, Keisha and I can do the same.

And I have. His lack of everything ignited a fire in me to be more than what he could ever be. So in this bizarre way, I’m semi-thankful for his decision to bail on his children.

But I cannot speak for my sisters.

To the people: I express my sentiments by way of a blog that deals with race relations because I know that parts of this story are way too familiar, but not limited to the average Black kid. I’m quite sure that there’s a mother and her child(ren) wondering how they will eat because pops decided to go into the freezer and steal packs of meat to sell for a 30-minute high, perhaps with his homies. Or the fact that pops stole and sold big sister’s clothes, momma’s jewelry, and the family’s (Nintendo) game system.

Now here I am. In a matter of 3 days I have been more of a man than my absent father and have forgiven him for two decades of abandonment just so he can be at peace with his soul. And as silly as this sounds, per his request, my sister and I are actually considering traveling over 1,200 miles to “pay our respect” before he departs this earth. This is important to me not because these are his last wishes (not sure if he deserves that from us), but because it’s something that I believe a good man is supposed to do. And besides, I couldn’t imagine living the rest of my life not forgiving someone who pleaded for forgiveness; I know the day will come when I will ask my father to forgive me one last time.

While finances are a major issue, we will make an attempt to take a trip to see our biological father for the first time in nearly two decades and for the last time in our lives. We may have to go into our savings or put a bill on the back burner (something fathers would normally do for their kids). In the meantime, all we can do is pray that the Lord will forgive him for giving up on us and continue to pray for every kid who suffers from the deadbeat dad experience.