Build (or Rebuild) Your Legacy: A Tale of Two Fathers

We just celebrated Father’s Day, and many of us did our best to honor our dads. But there are a lot of us whose fathers didn’t do a lot that was worth honoring. If that’s your situation, where does that leave you in your fathering? Maybe a few stories will be enlightening for you, as they were for me.

For the past 30 years, my perspective on fatherhood was based largely on my situation at the time—young father, dad with school-age kids, middle-aged father, and so on. Now that I’m a hospice chaplain, I am seeing the challenges of fatherhood from an entirely new perspective—the end of life. I want to tell you about two fathers and families I recently encountered.

One hospice patient, Dan (not his real name), grew up in Michigan. He told me that his dad was a very important political figure in the state. I later learned from Dan’s daughter that her grandfather was actually a local city councilman with an overblown sense of importance. Dan’s father was also impossible to please. Dan grew up always falling short of earning his dad’s approval. And so, throughout his own life, Dan would “puff his résumé,” deceiving others in an attempt to earn the respect he never received from his own dad. Although he was mid-level administrator in the government bureaucracy, Dan claimed to be an ace pilot having flown everything from WWII fighters to the Concord. It simply wasn’t true. Dan never flew anything more robust than a single-engine prop plane.

Dan was also a terrible dad. His children told me about an old fraternity paddle Dan kept from his college days. When there was discipline to be dispensed, he meted it out fiercely, abusively in Greek letters. In the words of the children, if Dan could not earn his father’s respect, neither would his own children earn his.

As his health failed and dementia came on, Dan mellowed in his last months on earth. His daughter was, surprisingly, devoted to her father’s care and visited him several times a week. One day she said to me, “My dad is finally the man I always wanted to be a daughter to.” It was tragic and sad, yet healing for her. Dan’s three sons, still too wounded to make peace with their dad, chose not to be with him or even to call and say goodbye at the end of his days.

As the daughter and I walked Dan’s body out of his senior living community, many of the staff who served him walked behind the gurney. Rounding a corner, his daughter looked back at the procession. She laughed to herself, “Dad is finally getting the parade he always thought he deserved.”

My second father tale is about Jerry (not his real name), and it starts similarly. Jerry’s father grew up in a southern logging company town. At a young age, Jerry’s dad became addicted to alcohol and gambling and lived in the shadows of bootlegging. In tears one day, Jerry told me, “My dad never gave me five minutes of his time until I was over thirty years old.” What a wound!

If Jerry had followed Dan’s path in life, I’d be repeating the same sad tale over again. But Jerry didn’t.
His mother begged him and Jerry promised to “not grow up and be like Dad.” Instead, Jerry went to college, distinguished himself as an officer in three battle campaigns in WWII, and went on to become a highly respected executive—running operations over an entire continent for a major US-based manufacturing company. Jerry chose to overcome, not repeat “the sins of his father.”

As a result, Jerry has created a legacy that is already blessing four generations and will continue to do so for generations to come. His three children had an adoring, supportive father who gave them every confidence to live whole and wholesome lives. Jerry’s son once said to me, “As I walked out of dad’s apartment yesterday, he said to me, ‘There is no son on the face of the earth who is loved more than you.’” The son added, “I know it is absolutely true.”

These two stories illustrate the powerful, multi-generational impact we all have as fathers. The men of each generation have the choice of following in their father’s footsteps—for good or bad—or turning to create an entirely new legacy of blessing. Having a weak, bad, or non-existent father is a regrettable situation, but it is not the end of the story. Only the beginning. You can write your own tale that will be told for generations.

Would you like your story to read more like Jerry’s than Dan’s? Here are some encouraging thoughts for you. 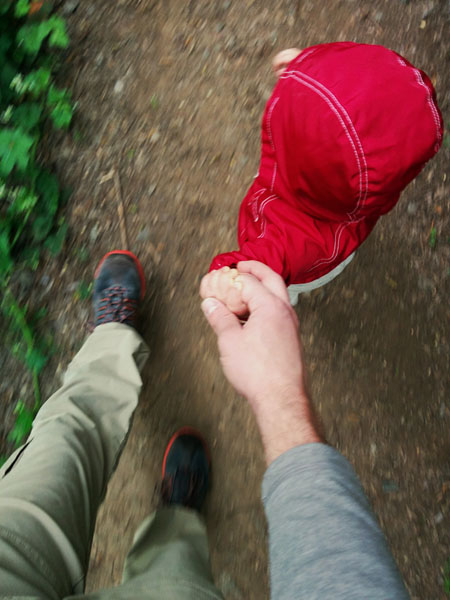 I suggest you take inventory of your dad’s strengths and weaknesses. Get a good handle on how he influenced you, and then commit to carrying forward the strengths while correcting the weaknesses.

Also, look around your community or church. Is there a man who seems to be doing fathering right? Invite him to mentor you. He’ll be honored and you’ll grow.

Take it from me—there are tons of resources available at fathers.com. Dig deep and invest in yourself.

Whatever you do, I want to remind and encourage you: the only tale that will be told of you as a father will be written by you and your children. And that story will be based on choices you make every day to be the best dad you can be. Go! Write a beautiful story!

A bonus tale about Vonnie (not her real name): I often ask my hospice patients where they would go if they could return to some location they once visited. Vonnie surprised me when she replied with a time, not a place. She said, “When I was learning to walk.”

I asked her what was significant about that time. She said so sweetly, “That’s when my father was with me. I can remember holding his finger to steady myself as I walked.”

When does a child learn to walk? About age one! Vonnie cherished that earliest memory for over nine decades. Her mom and dad divorced when she was young, then she bounced from relative to relative and lived in an orphanage for while. As a teen, she ran away from home in Oklahoma to go find her dad in Houston. Vonnie tells about the powerful need every person has to be loved and accepted by their father.

What kind of father will you be?

Clark H. Smith and his wife, Alyse, live in Overland Park, KS, and have four grown sons and one grandson. As a pastor and hospice chaplain, Clark has long been impressed with the multi-generational impact of a father’s choices. Clark’s blog on fathering can be found at ItsGoodToBeTheDad.com.