Dad, Celebrate Your Kids on This New Holiday

Our friend Todd Wilson of familymanweb.com is an author, blogger and conference speaker. Several years ago he started celebrating that very thing—Kid’s Day. So we’re featuring Todd this week as a guest blog.

The first thing you should know is that Kid’s Day is on the first day of summer—the day with the most daylight hours. The actual summer solstice is usually either on June 20th or 21st, depending on which time zone you’re in. To make it easier, let’s call it June 21st.

I have to admit there is satisfaction in having originated the holiday known as Kid’s Day, although I find it hard to believe that some well-meaning greeting card company hasn’t come up with the idea to sell cards. I mean if there is Boss’s Day, Secretary’s Day, In-law’s Day, and Postal Carriers-who-deliver-by-car Day, you’d think they’d have come up with Kid’s Day.

My inspiration came a few days before Father’s Day last year. Ben and Sam were being loudly secretive about the gift they had made, hoping to entice me to the point of frustration. I played their game for a few minutes, and then as though a light had been flipped on in Ben’s head, the merriment came to a sudden stop and he asked, “Hey, we have Mother’s Day, and Father’s Day…” (I could see where this was headed), “Why don’t we have Kid’s Day?”

My first thought was, “Because Kid’s Day is 365 days a year. You don’t have to go to work, shoulder any responsibility, clean up after sick people, or spend all your money on people who don’t appreciate it. What more could you want?” But I didn’t. Instead I said, “You’re right, there should be a Kid’s Day.” I tried to sound outraged that it had been overlooked all these years, but I was bothered more that the excitement of my day had been eclipsed by Kid’s Day.

Gathering myself up to my full five feet, ten and a half inches, I spoke in my official mayor-of-the-house-voice, “I declare the first day of summer to be officially known as Kid’s Day.” What better day to celebrate kid-dom than on the first day of summer fun. Unaware of the monster I released, we continued our ordinary lives and sailed right through Father’s Day towards the uncharted waters of Kid’s Day.

My wife made one thing very clear. This was my idea and my responsibility.

“That’s OK,” I reassured her, “I’ll take care of everything.” It was an easy promise to make; Kid’s Day was still three weeks away.

That was last year. We made it through our first Kid’s Day and a week ago, we celebrated our second.
They were ready this year. Back in March they started asking, “How many more days until Kid’s Day?” It was like we were on this eternally long road trip with the question asked every ten miles, “How much longer?” Gone were the days when they actually thought about Father’s Day. Now it was just a bathroom break on the way to the main event. Without saying it, I knew my wife was thinking: Good idea, Mr. Kid’s Day inventor. 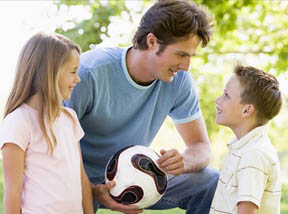 I was bound and determined to make this year’s Kid’s Day a great day, not only for the kids, but for the whole family, and by Kid’s Day Eve the anticipation was thick. The only problem was that their idea of spectacular was bigger than my idea. Theirs involved unlimited supplies of money and time, of which I had neither.

The morning of Kid’s Day came. My alarm sounded, and I slid out of bed to begin the festivities. Ten minutes later, tiptoeing up the stairs and through the hallway, I opened the door to their bedrooms and entered with a tray of donuts, juice, a large stack of napkins for their breakfast in bed, and a cheerful “Happy Kid’s Day.”

“Wow,” they said, “we’ve never had breakfast in bed before.” Bingo! I was off to a good start.

After that, my plan was to head off to work, allowing them to play in the morning, and return at lunch time to let them open a few inexpensive gifts. This was going to work perfectly. Unfortunately, I had failed to go over the itinerary with the kids. By 9:30 a.m. my wife had called to inform me that our dear children were begging to open their gifts. From the tone in her voice, I sensed that a change in plans was the way to go.

We hung up, and I envisioned them opening their gift bags with squeals of delight. So you can imagine my disappointment when I got a phone call a few minutes later informing me that the dart guns I had purchased didn’t work, and they wanted to exchange them for something fun instead. Ouch.

Lunch time came, and naturally I had pictured a beautiful day with a picnic lunch in our yard. The rain dampened not only that plan but my mood as well, and I almost ruined lunch.

Next were naps, and I ran back to the office sulking about lunch.

The last leg of the Kid’s Day journey began with pizza on TV trays (the ultimate Kid’s Day dinner) and then off to a local arcade and play place. To make this part fun, I knew I’d need to spend money, which is hard for me. But I made up my mind and shelled out a few bucks for game tokens and ride tickets because our kids were worth it.

For the next hour, the kids ran from game to game, shoveling in tokens, and later redeemed their five dollars’ worth of winning tickets for five cents worth of prizes. We rode a few rides and went home, had snacks, got ready for bed, prayed together, and basked in the glory of a good day. And it was a good day. A day we have set apart to let our children know how much we love them and how grateful to God we are for them.

“And … hum, hmm …” [mayor voice] “should my strength remain, and the creek don’t rise, the first day of summer will forever be set aside as Kid’s Day.”

That night, as we said our last goodnights, Sam, who is the smiliest kid you’ll ever meet, said in an innocent voice, “Dad?”

“Yes, Sam,” I answered, “What is it?” I fully expected another request to stretch out the night.

“It was a good Kid’s Day today.” He said thoughtfully.

“What Sambo?” I tiredly said.

“Can tomorrow be Doggie Day?” he asked with a giggle.

I thought for a second. We could make it kind of fun and silly for our dog Chewy…but then I answered, “No.” I knew better. “Good night, Sam. Sleep tight.”

Now, for the rest of you dads, this could be a great idea for your family, too. Think of it as one more reminder to let your children know: “You’re special. You are worthy. I’m glad you’re part of our family.”

If you run with this idea—or if you already do something similar—leave a comment below or on our Facebook page. We’d love to hear how it goes with your kids and how you celebrated the day.