How I Handle Halloween

Let’s start with some indisputable facts. Halloween has some nasty roots. The Druids were the original demonic necromancers. Every October 31, on the eve of their new year, the Druids led the ancient Celtics in a rousing tribute to Samhain, the Lord of the Dead. Their form of trick-or-treating literally opened the door to the occult and other hellish, ghoulish and deadly forces.

Another indisputable fact about Halloween is that kids love it. They dress up, get free candy, stay up late, and do stuff they normally wouldn’t do. Truthfully, it’s a fun holiday for dads, too. I’m not talking about going to one of those Halloween parties for grown ups that are getting so popular. For many families, the end of October can be a great time to connect with your kids, build traditions and whip up a batch of howling good memories. 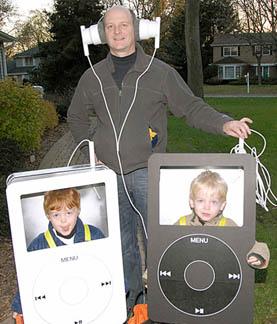 Coming up with activities is easy. Tromp through a muddy pumpkin patch. Get lost in a maze made of cornstalks or bales of hay. Go for a hayride. Sit around a campfire. Brainstorm creative costumes. Visit your kids’ school with a camcorder to videotape the costume parade. Slice up a defenseless pumpkin. Plan a traditional Halloween party. And, of course, accompany them as they head down the block for trick or treats.

Tempted to go overboard or too far on some of the events? Please don’t. You can certainly steer your kids toward a costume that doesn’t involve blood or murderous intent. There’s also no reason to drag your kids to an extreme haunted house. Limit trick or treating to your own neighborhood and stop when the pillowcase is one-third filled with loot.

Pretty much avoid renting or going to scary movies. Some Halloween movies may claim to be family-friendly, but be warned. I believe the truly repugnant stuff Hollywood is churning out these days can worm its way into the mind of a young person and change them forever. Even choices that seem harmless can lead to a slippery slope of bad decisions. Watching It’s the Great Pumpkin, Charlie Brown or Ghostbusters is probably fine. But it’s a father’s job to draw the line way before they run off to the cineplex with their friends to catch Texas Chainsaw Massacre or Saw XIII.

On Halloween and every day of the year, dad, you’re the go-to guy when it comes to helping your children make all kinds of personal and moral choices including explosive topics like graphic video games, your daughter’s wardrobe, curfews, piercings, music lyrics, etc.

Halloween doesn’t have to be a downer. I could go so far as even recommend you take advantage of the day to prove the awesome power of a dedicated dad. This holiday is a natural time to talk to your kids about good and evil. Teach them about safety issues like crossing streets and talking with strangers. Reconnect with your neighbors. Talk to your kids about the empty calories in candy bars, but let them know it’s okay to splurge once in a while. Tell them about your own favorite Halloween costume when you were little. Invite a fatherless child to accompany you when you go trick-or-treating. As your little ballerinas, football heroes, knights, cowboys and princesses go from door to door, remind them to say “Thank you.” Finally, teach them to share their goodies. (Maybe with you!)

Over the years, you may have heard the concern that Christmas is getting too commercialized and people have forgotten the true reason for the season. Well, I share that concern. But hey, I figure if they can take Christ out of Christmas, then we can certainly take the forces of evil out of Halloween.

Jay K. Payleitner is author of the book 52 Things Kids Need from a Dad, from which this book was excerpted and adapted. Jay is also a marketing consultant, speaker, and fathering advocate. Jay and his wife Rita have five children and live in Illinois. More about Jay – including how to have him speak to fathers near you.