The Lion Outside My Door

The sun shone brightly through the windows as my kids played together all throughout our home.  As I walked into the living room, I noticed the front door had been left open, presumably by one of the kids. With a tinge of frustration I walked over to the door to close it, calling out to the kids to make sure to leave the front door shut.

As I closed the door, I looked out the window and noticed the chilling sight of a lion crouched underneath it. Its teeth were bared and it had long front fangs drenched in saliva that glimmered in the bright morning sun. Shocked and frightened, I locked the front door and then ran to the other doors and windows in the house to make sure that they too were closed and securely locked. 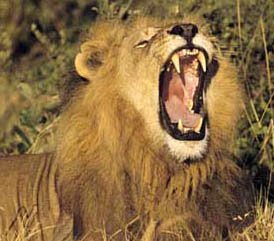 I called out to the kids to warn them of the danger looming just outside, and to make sure they knew that all the doors and windows had to remain locked. Blissfully ignorant of the impending danger, they went right on with their playing, unfazed by my warnings.

Dreams are interesting. They take bits and pieces of the people, places, and events of our lives and splice them together to create random and often bizarre stories that play out on the backsides of our eyelids. Some of the more beautiful ones leave us wanting more, while our nightmares can never end too quickly.

I have never been one to put much stock into trying to discover the meaning of my dreams. I generally dismiss them as the result of stress or perhaps too much late night snacking. However, this dream left me with the clear impression that it was not merely the random result of a few too many Fritos, but instead an intentional message meant to awaken me to my own lackadaisical and naïve attitude toward the spiritual aspects of my role as a father.

In my dream, I continued to walk around the house, looking outside to see if the lion was still hanging around. Here and there I caught glimpses of it, and noticed upon seeing it more fully that the outline of its ribcage protruded through its skin, indicating starvation. It’s cold, dark eyes restlessly searched our home for an entryway. I realized in that moment that the lion was after my children, and that it intended to devour as many of them as it possibly could. I became soberly aware that only I could protect my children from the lion, by preventing its entry into our home.

In the same instant, I glanced at the front door and noticed it open again. The lion noticed it too, and made a dash to get in. I shot over to the door and reached it just as the lion leaped for it, and I managed to close and lock it just as the thud of its impact hit the other side. Relieved, I again called out to my children to make sure the door was closed and locked, but my pleadings seemed to fall on deaf ears once more as they continued on with their playing.

I found the front door open again and again, only to go through the same routine of rushing over to close it and then to warn my children about keeping it closed. Despite my diligent efforts, the door was left open one time too many, and the lion finally forced his head through the opening and into our living room, with his sights set on my beloved, helpless little children.

At that moment, I shot up in bed. The transition from sleep to consciousness seemed blurred and delayed as I sat still engrossed in the nightmare.

As I slowly came around, this Scripture clearly came to mind: “Be self-controlled and alert. Your enemy the devil prowls around like a roaring lion looking for someone to devour” (1 Peter 5:8). Immediately I realized that this dream had a purpose of supernatural origins, and that it was meant to warn me about becoming a complacent father. Since then, I have thought about the full meaning of the dream and its ramifications for my life and for my family, and for other fathers also.

Here is what I’ve learned: The lion (Satan) truly exists, and so do his demons – not existentially or metaphorically, but actively and purposefully. The devil is on a search-and-destroy mission, stealthily spurred on by his total and unabashed hatred for God’s creation, especially people. He hates me, he hates you, he hates our wives and he hates our children. In fact, he particularly targets our children for destruction. Like the ravenous lion in my dream, he will relentlessly seek a foothold into our homes in order to inflict destruction on our kids. Ironically, it is often fathers, not mothers or children, who leave the door open for him to enter in.

In my dream, I repeatedly reprimanded my children for leaving the front door open. I now realize that the door actually represents the areas of unrepentant sin in my own life that I have failed to close. Those sins have painful ramifications not only for my life, but also impact my family in harmful ways. Satan effectively strives to convince us that what is done in private has no impact on anyone else, but the sinister reality is that this perspective is a lie. Sin affects my attitude and behavior toward God, toward my family, and toward a host of other things in my life.

I cannot be an effective spiritual leader to my family when sin abides unchecked in my life. And worst of all, my sin is an avenue through which Satan gains entry not only to destroy my life, but also to destroy my family as well. In short, fathers deceive themselves by thinking that we can effectively guard the spiritual well-being of our children while at the same time welcoming the enemy into our homes through our pet sins.

A father who is serious about the spiritual protection of his children must take an account of where his life stands before God. Has he surrendered completely to Christ’s lordship in his life, or does he harbor unresolved sin that serves as a portal for the devil to access his family? Further, is he focused and aware of the devil’s wicked schemes or is he preoccupied with other personal interests and activities that prevent him from devoting the time and attention necessary to ensure his children’s spiritual well being?

Sadly, statistics show that many Christian fathers who ought to know better are actually no different in how they choose to spend their leisure time than non-Christians. For example, according to the Barna Group, the average church congregant spends more time watching television in one day than he spends in all spiritual pursuits combined for an entire week.1 Christians also spend roughly the same amount of time each week watching television and movies and going online as do non-Christians, and that they spend about as much money on entertainment and technology as do non-Christians.2

Given this data, it is clear that active fathering may very well mean turning off the TV or giving up fantasy football or a host of other activities that compete for our time and attention. Hobbies and personal interests are necessary to help us to relax and recharge, but must be balanced with the biblical mandate to “be self-controlled and alert.” This is difficult to do when we’re too wrapped up in our own trivial pursuits to deeply engage in our kids’ lives. We cannot afford to neglect our children for the sake of other things that are, at the end of the day, completely irrelevant to our lives and to our families.

Children grow up quickly, and our window of influence in their lives shrinks every day. Satan and the world want nothing more than to sink their teeth into our kids. Fathers must remain diligent at all times in protecting their children, and the reality of the devil’s schemes should serve as motivation for us to ensure that the door to sin in our lives is closed.

Further, we must not be afraid to make rules and decisions that are in our children’s best interest, even if our kids get upset with us for doing so. God holds fathers accountable for how we handle our role as spiritual protectors, and beyond merely warning our kids of danger, we must insert ourselves in between our children and any source of potential harm, even if they hate us for doing so. Their hate is temporary, but the consequences of failing to get involved often last a lifetime, maybe even an eternity.

Wake up, fathers!  The lion is at the door!

Chad Rath and his wife Barb are the proud parents of seven children. He is a graduate of Hope International University where he received a Master of Arts degree in Christian Leadership. He is currently employed in the financial services industry and loves to spend time writing and sharing what God puts on his heart.