A Game of Hope (Must-See Video)

An amazing story of hope comes from Texas high school football. Kris Hogan, coach of the Faith Christian Lions in Grapevine, looked at his team’s schedule and noticed that they’d be playing against Gainesville State School, a correctional facility for teens. Leading up to that game, he had an out-of-the-box idea:

“I started thinking about the fact that many of these guys had convictions for drugs, assault and robbery,” said Coach Hogan. “Many of their families had disowned them. Then I thought about what it would mean for hundreds of people to suddenly believe in them as individuals and as a team. That’s when I decided we were going to do something different.” 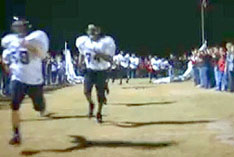 Coach Hogan asked some of the parents to sit on Gainesville State’s side of the field and cheer for the other team—complete with cheerleaders and a spirit line for the players to run through before the game. Needless to say, the boys on the Gainesville State team were a bit surprised and confused at first. But the result was just what Hogan was hoping for. After the game, the Gainesville coach came up to Coach Hogan and said, “You will never know what you have done for these boys.”

Here’s a video about the game as covered by Matt Barrie of NBC Sports, Dallas-Fort Worth, TX:

Coach Hogan is nothing short of a hero, and that is confirmed by other details we’ve seen about how he runs his football program. He has what we would call a bigger vision for fathering. His coaching is about a lot more than football, and he recognizes how important it is to reach out to other children who need encouragement and support. He also knows that even small, purposeful actions can make a huge difference in those children’s lives.

These are the kinds of the things that can change our nation’s future for the better. Using Kris Hogan’s example, what steps can the rest of us take to encourage other children—especially kids who don’t have a father? At the National Center, we often urge dads to include other kids when they’re playing outside in the neighborhood, or on fishing or camping trips. But don’t stop there. You probably have some unique opportunities in your community or neighborhood—ways you can think outside the box and do something remarkable that those children will remember for the rest of their lives.

– Season of Life: A Football Star, a Boy, a Journey to Manhood by Jeffrey Marx