Also, please realize that outside your home there are millions of children who don’t have a dad to honor on Father’s Day, who don’t benefit from everything a dad does, and who are therefore facing tough odds in many different areas of life. Some of those kids are on your street or in your children’s school. 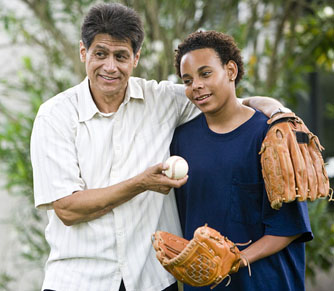 Our nation — and the world — needs more committed dads like you to make a difference by reaching out and encouraging a child in need.

Greg is a good friend of the National Center and an active WatchDOG dad who stepped up for a boy named Brett. Last year, 7-year-old Brett lost his father — a very involved and caring dad — to a heart attack. Several months later, Brett was suspended from school for behavior problems, and he’d never had those kinds of issues previously.

Since Greg’s kids attended the same school, he heard about Brett and talked with the school’s leadership about Brett’s situation. When the principal mentioned that Brett needed a father-figure, Greg knew he was the one to step into the gap. He contacted Brett’s mother and asked if he and his 12-year-old son Jack could take Brett for a “boys’ day out.” The mother was overwhelmed.

Greg and his son came up with a list of twenty things a 7-year-old would like to do. Then, one Sunday afternoon, they picked up Brett and took him to play basketball and go swimming. They shot off rockets and chased trains. More than once, Greg heard Brett say, “These are things me and my dad used to do.” Greg gave the boy his cell phone number and let him know he was always there for him.

Since that Sunday, Greg and Brett often talk on the phone and look for each other at the school. The best part is that Brett’s performance and behavior issues at school have turned around.

My family will never be the same for engaging in the life of this young boy. It’s hard to imagine how such a simple, easy, intentional act can radically change the life of a boy forever. I can’t help but wonder how many fathering opportunities I have walked away from in the past. If I can make a difference, you can too!

That’s the power of a father figure in action, and you can be an important part of changing the culture by encouraging other kids.