Lessons of a Big Brother and Mentor

One of the clichés about volunteerism is that “you get more than you give.” In my case, it was true in ways and means I least expected. I’ve just become a Big Brother, again, to a 7-year-old boy and a mentor to a 23-year-old young man. As these relationships are new, I don’t yet know what lessons I will learn. But I know well the lessons I learned the first time around.

I became a Big Brother long before I was married or a parent. My life, at that time, was pretty heady. In my early 30s, I had a successful showbiz career in which I was paid way too much for having so much fun. I lived in a lovely home in a chic part of town, had two cars, and no one to worry about other than myself.

Fortunately, when I looked in the mirror and realized that reality, I began to search for something to do that wasn’t so self-centered. Quickly, I rejected the usual choices: no industry-favored charities and committees in which my role would be fund-raising, glad-handing and networking among others in the business. A hands-on experience was my desire, one in which I could directly impact someone’s life. The big charities have wonderful purposes and are helpful to many; it just wasn’t what I sought. 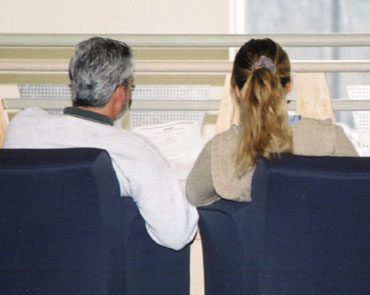 All my early jobs as a teen and young adult centered on working with kids: at camps, teaching tennis, being a lifeguard or park director. So I went through the process of becoming a Big Brother, and after several months I was approved and offered a match with a “little.”

Here were my expectations going in: I am a guy who loves to play ball, literally and figuratively. I loved going to the movies and doing pretty much anything physical, wet or dry. Also, every activity in my life usually involved food. You eat before or after, you stop for an ice cream, plus you must debate emphatically where to go to eat.

I was matched, as luck and maybe God decided, with an 8-year-old girl. In those days, they did match men with young girls because, after all, boys and girls both need male adult figures. Due to legal fears, mixed-gender matches are much fewer today.

My “little” was non-athletic, hated going to the movies, didn’t care to eat much, even ice cream. When I met her, she had a minor obsession with finding out who her father was, as she was the product of artificial insemination. There was no father in her life; no dead father, no dead-beat father, no abusive father — no father, period. For the first couple of years I knew her, this plagued her.

I had to learn to accept that her interests were not mine and try and find some kind of common ground. It wasn’t easy but the irony was this extra effort and challenge ultimately proved to be the lesson I received before I became a parent. Eventually, we did find common ground. Often, it was just a matter of taking turns doing what the other wanted on alternate outings. But mostly we learned to talk to one another. I became her confidant.

Over time, she opened up about her life in a way she wasn’t comfortable doing with her mother. She shared with me about various problems and issues she faced through her teen years. Without a doubt, I knew my job as the only adult male figure in her life was to model responsible manhood and to listen to her. I let her know she was being heard, and I occasionally provided some insights about the ways of boys and men. When she confided in me about poor choices she had made, I told her that everyone makes mistakes, and it’s what she learns from them that will determine her character. I also let her know that I wasn’t going to reject her because she made some bad decisions. Maybe that was what she needed most of all.

Today, my “little” is a devoted middle-school teacher with a passion for her students that transcends the norm nowadays.  She’s a fine adult young woman, about to turn thirty.

She turned out to be my prep course for being a parent. What a gift; what a surprise. When I did get married and was blessed with two boys, I had similar expectations of them that I had of my little sister. They would like the things I did and, of course, being my biological offspring, have many of my skills and traits. Not quite.

Neither boy had any interest in sports. My youngest was a vegetarian till he was about ten, and their interest in food was pretty much limited to pizza. If a movie was older than they were or, heaven forbid, in black and white, they wouldn’t give it a try. Yup, they were much like my little. They were their own individuals.

While I still did my best to introduce any and every sport to my boys, I more easily accepted that they weren’t me. One was musical and the other artistic, and it was very clear neither would support me via a professional sports career in major league baseball, the NFL or NBA. I lightened up quicker and easier on my expectations, was much less disappointed that they didn’t share my loves and interests, and could better embrace and support their passions — all due to my lessons as a Big Brother.

What I will learn from my two new matches remains to be seen. I know, from the 23-year-old, who has been sick since birth with a neurological disorder in which few live past 30, that I come home after each visit thanking God for my family’s good fortune and health. My seven year old “little” reminds me of the joy of being a little boy.
If this sounds like I’m an advocate for volunteering, I am — especially if it involves reaching out to kids. You will be rewarded and be a better parent, and some kids’ lives will be a little brighter because of you. I promise.