In the late 1980s, many researchers and those working with families recognized a disturbing problem in many families: the lack of an engaged father. This prompted Ken Canfield, while pursuing his Ph.D. at Kansas State University, to apply sound research and seasoned faith to the role of fathering. After studying the existing statistics and research, he arrived at the undeniable conclusion that helping men become better fathers is perhaps the most strategic way to benefit children and strengthen families. It was this conclusion that prompted him, along with colleague Dr. Judson Swihart, to write a white paper which became the founding document for the National Center for Fathering (NCF).

The Center was founded as a 501(c)(3) nonprofit in 1990, with the purpose of “turning the hearts of fathers to their children.”

Recognizing the need to create a national voice, they soon enlisted support from leaders in areas of business, family, and faith, including leaders such as Blake Ashdown and Emerson Eggerichs, and assembled a board of directors for the fledgling effort.

NCF gathered a team of researchers to develop the “Personal Fathering Profile” (PFP), a pioneering survey instrument which gave fathers specific feedback on their fathering. See more about the PFP and NCF’s research foundation. With the PFP as a key tool to help dads, NCF developed small-group training curricula and workshops for dads.

During those first few years, it was also recognized that research and writing would be a two-pronged approach to address fathering challenges, which led to the additions of Gary Klozenbucher, Lowell Bliss and Brock Griffin to the staff.

As NCF continued to grow, it began creating tools to help fathers worldwide—including: Today’s Father magazine; a daily 3-minute radio program; a book titled The 7 Secrets of Effective Fathers, which is based on research collected using the PFP; Beside Every Great Dad, a book written for moms; and live weekend seminars hosted by NCF which grew to an average attendance of 1,200 dads and moms per event. Randall Nulton, who was not a father but recognized the power of fathers, joined the staff in 1993 to coordinate and promote the seminars.

Also in 1993, NCF added a key member of the team when Peter Spokes, after a successful career in consumer product marketing at General Mills, joined the effort to help engage fathers as NCF’s Executive Vice President, helping to run day-to-day operations and drive key initiatives.

With the support of Mark Taylor and Ron Beers of Tyndale House Publishers, NCF embarked on a national media campaign to promote the published books and responsible fatherhood in general.

Also during this time, in tandem with growing attention around the need for responsible fathers, large stadium conferences led by Colorado-based Promise Keepers fueled a larger men’s movement around the country. Naturally, fatherhood emerged as one of the important issues in which these faith-inspired men wanted to improve. To better understand and support these men, NCF produced resources and conducted ongoing research at the events, which added to the ever-growing database of insights on fathers’ situations and challenges.

The NCF team grew in size and expanded its toolkit for reaching dads—seeking to meet dads where they are. Live seminars continued, with a focused effort to encourage men to continue meeting in small groups after the events.

A game-changing program called Train-the-Trainer, led by Ron Nichols, was created to educate men to become NCF trainers. These trainers were then equipped to go out and educate groups of other dads in their communities and spheres of influence. Since the program began, NCF trained more than a thousand NCF trainers in the United States and internationally, who have used their skills to train countless other men to become better dads. In addition, fathering advocates from nearly a dozen other countries have sought out NCF for training, which they continue to use with fathers globally.

The Train-the-Trainer program has led to partnerships with people like: Darek Cupial of tato.net in Poland; Rick Wertz of the Faithful Fathering Initiative in Texas; Dr. Edwin Chow and the Centre for Fathering in Singapore; Dave and Kim Clark and The Father’s Cry, who live in Texas but lead fatherhood programs in Africa as well as around the U.S.; Marvin and Jeanett Charles in urban Seattle; David Hirsch in Chicago; Sollie Norwood and the state of Mississippi, and many others.

NCF greatly benefitted from working with corporate leaders and foundations, like Ralph Smith of the Annie E. Casey Foundation, Daryl Heald of the Maclellan Foundation, and Joe Lee of the Darden Foundation. Joel Jennings of Gopher Sport in Minnesota was a notable addition to the board of directors. These men and many others to numerous to mention made significant contributions to the support base and added increased the credibility of a growing organization.

In 1996, Dr. Bernard Franklin joined the team to provide leadership for NCF’s efforts to address the specific challenges of urban and inner-city families, where fatherlessness and the negative consequences that come with it are often at their worst. He quickly assembled a team that included Dr. George Williams, Rahn Franklin, Mike Randle, Amos Johnson III and others, who helped to bring attention and resources to urban fathers and families. Fathering Court was established in cooperation with members of the Jackson County Court in Kansas City to help fathers in arrears with child support to rebuild and regain relationship with their children.

The National Center for Fathering became recognized as a thought leader in the fathering field. Through the years, NCF has been honored to be asked to contribute to the national conversation about fatherhood—in fatherhood leadership groups and committees, at summits and conventions, in partnerships with states and communities, at the White House and more. It also provided a base for budding academics to have access to its rich collection of research, providing information and assistance for more than ten dissertations.

NCF’s collection of resources grew as well, which included the publication of a handful of new books for fathers, with writing and editing help from Brock Griffin. Fathers.com became NCF’s online home for 24/7/365 practical tips and information for dads. Dads also received a weekly FatherFax—which soon switched to email and became fathers.com weekly—providing a regular dose of ideas and encouragement to help dads in their journey.

This period also saw the expansion of NCF’s annual What My Father Means to Me essay contest, where children in grades 1-12 could write about their fathers and father figures, and devoted dads were honored at Father of the Year celebrations. Partnering with various groups and sports teams around the U.S., NCF held essay contests and fatherhood celebrations in ten different markets.

Key staff additions during this time include Steve Wilson, who provided solid leadership in the area of administration and accounting. Ken Howard came on board to support large event responsibilities and tell his unique and poignant story. Lucy Bloom was added to the team to provide leadership for a new event: Father-Daughter Summit, which brings dad-daughter pairs together to build stronger bonds. And Brian Blomberg joined the staff to lead development for the organization. (Many others along the way have made valuable contributions to carrying forward NCF’s work and mission.)

In 2005, NCF formally joined with the WATCH  D.O.G.S. (Dads Of Great Students) – an initiative seeking to involve positive male role models in schools to support children’s education and provide extra sets of eyes and ears for enhanced school security.

Carey Casey joined the team in 2006 as Chief Executive Officer, bringing with him a unique mixture of vibrant leadership and caring encouragement. NCF simplified its research framework and created a new strategy called Championship Fathering. In his unique and dynamic style, Carey began taking the message of Championship Fathering to groups of dads at seminars and speaking events around the country.

The staff and many colleagues of NCF were deeply saddened by the untimely passing of Peter Spokes in May 2010.

In addition to building a changing-fatherhood culture, the National Center for Fathering engaged with state and community efforts to create a Strong Dads program. Leaders from NCF also participated in the foundation of the Fatherhood CoMission and maintained other partnerships to promote responsible fathering.

While NCF’s resources and programs continued to reach and help many dads, the organization faced challenges brought on by changes in many areas of the culture and the non-profit world. Interest and funding began to wane, and the organization responded by reducing its staff and programs.

2018 and Forward: Looking to the Future 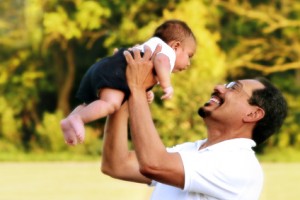 In 2018, fatherlessness continues to be one of the most pressing social issues of our time. With the growing complexities in families and fathering situations, the need for effort and attention in this area is even greater. NCF will continue to focus on research and education for fathers as a way of improving outcomes for children – today and in the future.

NCF has a renewed resolve to reach today’s fathers with fresh resources and programs. New studies are under way (or soon will be) to address the unique issues facing millennial fathers, fathers and daughters, mature fathers and grandfathers, fathers in faith communities, military and first-responder fathers, and fathers in a variety of other complex and challenging situations.

Dr. Ken Canfield believes that the best is ahead for fathers.com, seeking to build on the rich resources and history to address new challenges fathers are facing. If you share a passion for fatherhood or a conviction about the importance of this work, please get involved. NCF is a non-profit organization and would greatly appreciate your interest and support.