Here’s a Father’s Day challenge for you. (You have some lead time to think about how you can apply it.)

Here it is: Start one new habit that will make a difference with your family.

Think about one change you can make that will benefit your children or bring you closer to them, and then let Father’s Day be a time when you make a strong resolution to be that dad going forward.
Here’s one example of the power this can have from a dad and granddad named Gary who read the guest blog from a few weeks back about dating your daughter, and he sent us this story.

It started two decades ago, when Gary attended a fathering seminar presented by our founder, Dr. Ken Canfield. After the seminar, Gary was inspired to start a new habit with his two kids: regular one-on-one lunch dates with his daughter and his son at least once a month. Through the years, he was faithful with those monthly lunch dates—not perfect, but he kept them going. 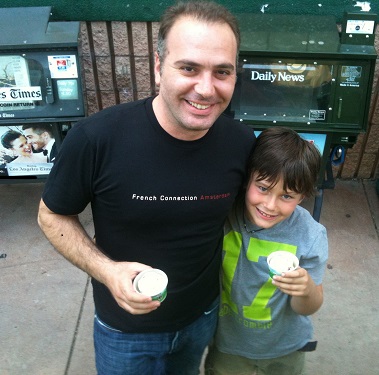 That’s nothing earth-shattering or over-the-top creative, but it’s a great idea, and one you might want to try. One-on-one time is extremely valuable in a world that’s getting way too busy—for dads and kids. The two of you get a chance to escape the frenzy of life and talk about anything from serious to silly. If you’re a man of faith, maybe you would want to include a prayer for your child and his or her future.

You’ll find that your child will look forward to that time with you. Kids open up more and relate differently when it’s just the two of you. It doesn’t have to break the budget either. On a nice day, a brown bag lunch in the park is a great option. (See the Action Points below for more specific suggestions.)

To finish Gary’s story, his kids are now in their early thirties. His daughter is married and has two children of her own, and they still live nearby, so Gary still has a regular “lunch date” with her.

And that’s great, but you know what’s even better? Gary’s daughter’s husband is doing it, too! Inspired by his father-in-law, he takes his 7-year-old daughter out to lunch on Saturdays.

And not long ago, Gary’s son and his daughter-in-law had their first child, a baby boy. Already this new dad is talking about starting a “lunch time” with his son—just like Gary did for all those years and still does today.

This is the kind of thing to get excited about, because it’s an example of how, little by little, committed, responsible fathering will change the world for the better. Simple, everyday acts of love and commitment really make a difference in your family.

So, what habit can you start as a father this year that could become a pattern, a way of life, and maybe even be carried on in the next generation? Or maybe you’re already doing something that could inspire other dads. Please let us (and other dads) know by leaving a comment below or on our Facebook page.