How to “Build” a Better Dad: Invest in Your Sons

These are interesting days to be a dad. On the one hand, research overwhelmingly tells us that dads play an essential role in the lives of their sons and daughters. On the other hand, certain voices in culture not only question the necessity of dad, but insist that dads are obsolete. Just a few years ago on Father’s Day, CNN featured a debate on this question: Are some kids better off without a dad? (Can you imagine a similar debate about motherhood on Mother’s Day?) 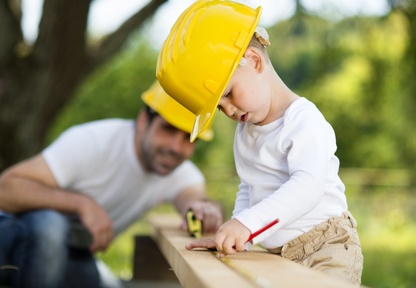 The good news: we can reverse that storyline. In addition to giving men the tools they need to be great dads, we can start building great dads now by training our boys in the art of fatherhood.

Here are a few ways to get started:

Give boys purpose. As we see a boy’s emerging gifts and talents, affirm them in him. What he’s good at is a powerful clue to his purpose for life.[4]

Give boys masculine energy. Dads are built by dads. So the key to building great dads is to surround our boys with great dads—their own dads and/or other men—who can model responsibility, love, compassion, and fatherhood to these dads in the making.[5]