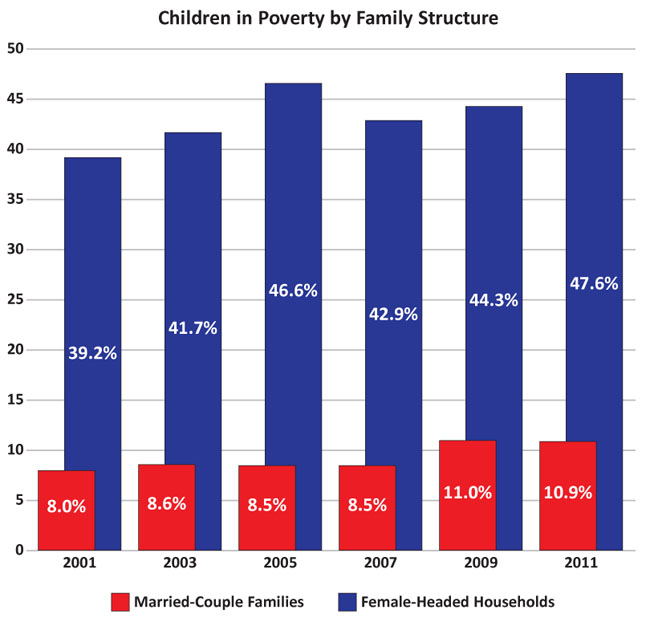 – Father involvement in schools is associated with the higher likelihood of a student getting mostly A’s. This was true for fathers in biological parent families, for stepfathers, and for fathers heading single-parent families.

– A study using data from the National Longitudinal Study of Adolescent Health explored the relationship between family structure and risk of violent acts in neighborhoods. The results revealed that if the number of fathers is low in a neighborhood, then there is an increase in acts of teen violence. The statistical data showed that a 1% increase in the proportion of single-parent families in a neighborhood is associated with a 3% increase in an adolescent’s level of violence. In other words, adolescents who live in neighborhoods with lower proportions of single-parent families and who report higher levels of family integration commit less violence.

– Children age 10 to 17 living with two biological or adoptive parents were significantly less likely to experience sexual assault, child maltreatment, other types of major violence, and non-victimization type of adversity, and were less likely to witness violence in their families compared to peers living in single-parent families and stepfamilies.

– A study using a sample of 1409 rural southern adolescents (851 females and 558 males) aged 11 – 18 years, investigated the correlation between father absence and self-reported sexual activity. The results revealed that adolescents in father-absence homes were more likely to report being sexually active compared to adolescents living with their fathers.

Source: Teachman, Jay D. “The Childhood Living Arrangements of Children and the Characteristics of Their Marriages.” Journal of Family Issues 25 (January 2004): 86-111.

DONATE!
We use cookies on our website to give you the most relevant experience by remembering your preferences and repeat visits. By clicking “Accept All”, you consent to the use of ALL the cookies. However, you may visit "Cookie Settings" to provide a controlled consent.
Cookie SettingsAccept All
Manage consent