The Power of the Written Word

Is there a special handwritten note from your childhood that you remember? I fondly remember my special note. It was from my father.

I was a sophomore in high school in a small, rural town in Iowa. I was getting ready to board a noisy yellow school bus for the long trip to Des Moines to play in the High School state basketball playoff. Basketball was a way of life for our town when I was a child, and that year’s state playoffs were the first for our little hamlet. If you’ve ever seen the movie Hoosiers, it was a similar setting. Shop windows around town were painted in our team colors, crowds of people everywhere, and the local police provided a car, with its lights ablaze, to lead the bus for a ceremonial escort out of town. 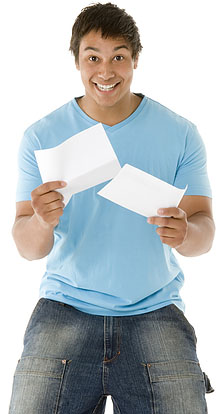 With my gym bag thrown over my shoulder, I went to say goodbye to my parents one last time before the long bus ride. With an awkward and unusual gesture, my father handed me something. I looked down and it was a letter he had written. I was given strict instructions not to open the letter until our bus was out of eyesight. I slipped it into my jacket pocket, somewhat shocked and unable to say anything.

Once on the bus, I settled into the dusty seat with my hands shaking while I ripped open the letter and started to read, hoping all the while my teammates would not notice me as we bounced noisily down the highway. The words in the letter became alive as I started to read what was written. On that single, handwritten, folded page, I was expecting to see words about success and accomplishment since my father was always great at recognizing my achievements and giving praise.

But instead, it was a letter written about how he felt about me and what he liked about me. He was proud of the person I was. He liked my gentle spirit and my kind personality. What he said was nothing new; he had said encouraging things to me before. But now there was written proof to reread and reflect upon whenever I wanted to.

It was an amazing experience, and for several moments I just sat there and stared at the page. For the first time, I noticed what great handwriting he had. And I sat there thinking about how unusual it was that a father would take the time to do this for his son. Even then, I knew that letter would mean a lot to me for the rest of my life.

Fast-forward several years to the present. Today I have two children. If you’re like me, you find yourself almost dizzy at the amount of information that people are able to process in a day. The pace of life, with financial worries, traffic delays, busy schedules, negative media and other challenges, can really get to us and beat us down. The advanced technology of today can help us accomplish more with our time, but it can also keep us from authentic communication with our children.

Several days ago, I met with Tom, a father of two. He explained that he’s frustrated because he tends to focus on the negative when raising his children. I challenged him to write notes to his children — just simple and quick thoughts that focus on the positive — praising them, telling them how proud he is of them and what he likes about them. At a follow-up meeting, he eagerly reported to me that an amazing thing had started to happen. The writing, no matter how short and simple, was allowing him to focus on the positive because he is actively and purposefully thinking about what he was going to write.

While on a business trip, I met another dad named Greg. His said his work has taken him all over the world, and he has seen and experienced many incredible things. Currently, he lives next to the ocean with his own boat dock in the backyard. He has had an amazing life, and he has learned a lot about the importance of written words. He had tragically lost his father when he was nine years old, and one of his most prized possessions was a school book that his mother had written for him the same year his father passed away. When I visited Greg’s house, he raced into his bedroom to find that book and show it to me. He said that there’s something magical about his mother’s handwriting, and when he looks at the book it gives him peace and comfort and reminds him how much he is loved.

Even with all of the material things he has been able to afford in his life, nothing compares to a book that was created for him over 50 years ago. For him, too, there is great power in written words.

Although there are many ways of communicating to children that they are loved, capable, and important simply because of who they are, I challenge you to also find ways to use handwritten notes for those purposes.

Handwritten letters and messages allow you to re-center yourself as a parent, remind yourself about your child’s positive characteristics, and capture precious moments in such a natural way. Doing this will affirm your children and help you build stronger relationships, and you’ll bring a new level of satisfaction to your fathering.

An author, entrepreneur and father of two active boys, Lance J. Looney has helped strengthen the lives of children, parents and couples through his ground-breaking daily book, the i like book. After graduating from Northern Iowa University and spending many years in corporate America, Lance and his wife, Meredith, set out on a journey to help people create “fantastic relationships” by promoting a back-to-the-basics philosophy of positive attention and moments of meaningful reflection with loved ones. You can visit Lance’s website here.