We’re excited to have exclusive access to a new clip from the movie Courageous. In this scene, a dad meets a young man who has come by to take his daughter out for a ride.

You might remember the 8 Simple Rules for Dating My Teenage Daughter. The “rules” were written by humor columnist W. Bruce Cameron, and they became a book and later a TV sit-com. They include: “No complaining while you’re waiting for her. If you’re bored, change my oil,” and “You make her cry, I make you cry.” His list is funny and irreverent, but I also appreciate the no-nonsense tone. It accurately captures a father’s serious role to both protect his daughter and prepare her for dating and other awkward situations.

How do you — or how will you — handle these situations as a father? Watch how Nathan handles one in the movie scene:

There’s something unfair about raising daughters. For many years, we raise them with great care and attention, and then we put them out there to be wooed by young men who, by and large, don’t really have a clue. That’s how it sometimes feels for dads of daughters. That might be unfair to those of you who are raising responsible, considerate sons, but remember what you were like at that age!

Is it old-fashioned for fathers to meet and “interview” potential boyfriend? It might seem that way to today’s teenagers, but we must not apologize or feel out-of-touch for playing this role in our daughters’ lives. Any rules that we put in place are there for good reasons; we don’t want them to be like many teenagers (and maybe like us when we were that age) who make permanent, life-altering choices at a time when they weren’t well equipped to do so.

There are some very real benefits to playing this role for your daughter:

I hope you’ll do this for your daughters. For more specific ideas on how those conversations might go, see the recommended resources at the end of this article.

For fathers who may not have a teenage daughter yet, let me add a few more suggestions, because there are related discussions that should really happen before there’s a young man or an emotional attachment in the picture. If you establish and talk through the principles or “rules” before they are needed, then the teen years will go much more smoothly.

Give your daughter a man’s input on what’s appropriate and what isn’t, including what a teenage boy is probably thinking when he’s with your daughter. Talk through responses she can make in certain situations, like when she needs to get up and leave, and how to say “no” and mean it. Make sure she knows she can call you if she needs to get away from a bad situation. (Make sure mom gives her ideas also.)

Focus on your daughter’s character. Tell her that a happy relationship is more about becoming the right person than finding the right person. With our two daughters, we didn’t want them thinking they needed to be out looking for Mr. Right at every opportunity. Instead, we tried to keep them focused on becoming young women of high moral character. Then, when quality young men showed up, my girls were ready and able to spot those qualities that would make them good partners.

Reach out to those young men. Protecting your daughter is important; your first thought is her well-being. But as part of the process, you’ll have many opportunities to encourage and influence young men who may not know what a positive romantic relationship looks like, and may not have fathers or other men in their lives who hold them accountable for their character and integrity. Whether your daughter continues to see a particular young man or not, you can become a powerful influence in his life, and it can start with that nervous first conversation about his desire to spend time with your daughter. 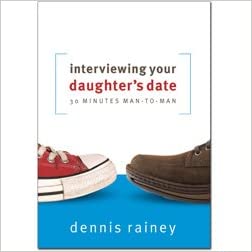