My daughter, Holly, has a severe form of epilepsy. The strong seizures began when she was about 14. During most days, she had one or more seizures. Some were “drop attacks,” which caused her to fall backward. She had many bad falls before we got her a wheelchair for her own safety. She also had seizures which were called “grand mal” at the time, where her body went into a convulsion that lasted several minutes, followed by sleeping for hours at a time. 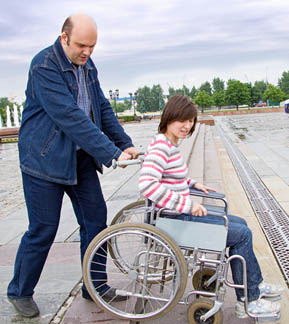 You can imagine the effect this had on our family. We had to withdraw Holly from all activities outside our home, including school. We went into survival mode: I limited my work travel to trips that were absolutely necessary and resigned from my church responsibilities. Our family life suddenly focused almost entirely on caring for her needs. We did only those things that had to be done.

If you have a disabled child, you know about the lifestyle adjustments that are necessary to give your child constant attention and care. You also know about the soul-searching questions and emotions that are sure to come. Here’s what I wrote in my journal during that first year after discovering Holly’s condition:

This afternoon I was lying in bed trying to take a nap. I was disturbed by the sound of the voice of a girl in the hall, talking very loudly. At first I thought she sounded like Holly, but as I listened, I realized that this girl could not be Holly. The girl in the hall was speaking too clearly, intelligently. Listening to this girl’s voice caused me to experience pain, the pain of having a daughter who will not be able to speak clearly, intelligently, have a normal life, and be a normal person. Then I thought of other times that I have experienced this pain. This is not a healthy reaction in me. In other social relationships, the pain of loss passes: the death of a child, a wife or a friend. Why doesn’t this pain concerning Holly pass?

It’s been about 20 years since her seizures began, and I want to share some of what I have learned. I hope some of this is beneficial for you if you’re on this journey with a child.

That may sound obvious, but you need to embrace the fact that loving your child and accepting his or her disability will take a lot of time, prayer, and working through emotions. What I have come to understand about that process is that it’s very similar to what people experience who are facing a terminal illness or who have lost a loved one. It’s a grieving process; I had to let my dreams for Holly die.

That process, as described in the famous book On Death and Dying by Elizabeth Kubler-Ross, is made up of five stages:

Of course, the ultimate goal is acceptance, but the other stages on the way are often very necessary.

I have seen many parents in the denial stage. They won’t accept their children’s challenges. One mother insisted that her daughter learn in a classroom with other children who had no learning disabilities. I could tell she was creating a lot of stress for herself, her daughter, and the staff of the school where she wanted her daughter to attend, although it was highly unlikely that it was the best situation for her daughter.

As a good example of anger, another parent had a son with serious neurological problems. I witnessed her rage at the doctors whom she blamed for her son’s condition, which began around the time he was born. She was past denial, but her rage was in full force.

Parents who have worked through denial and anger often engage in bargaining activities. They may try to bargain with God, by earnestly praying, “God, if you heal my child, I will be very good and do important things for you.” I also came to understand that, for many parents, searching for medical cures is another form of bargaining. Parents say to themselves, There must be a cure for my child, and I am going to continue searching until I find it. Of course that’s a reasonable pursuit, but are they searching just to help their children, or is it also because they don’t want to accept that they are parents of a disabled child? In this stage, parents cling to hope that their children will be cured and the dreams they had for their family will not be destroyed. They’ll do anything to try and take away the reality of their situation.

Remaining in the stages of denial, anger or bargaining can drain a parent’s physical and emotional energy, and perhaps their wealth. When he can no longer sustain denial or bargaining, and when his anger leaves him physically and emotionally burned out, the next step may be depression. My experiences with Holly were marked with anger and depression. In the early days, I didn’t understand the concept of acceptance as a process, and I judged myself harshly because of my emotional responses to Holly.

How did I come to accept my daughter’s condition? And how can you do the same? My faith in God is a vital part of my life, and I believe it’s only because of His work and His grace that I’ve come this far. And although this has been a spiritual journey for me, there are other tips that should be useful to any father in of a disabled child:

Deal with your own selfishness. Nothing exposed how self-centered I was like being a parent of a disabled child. I had considered myself a very upstanding citizen who was contributing positively to my community. And yet, when my disabled daughter demanded so much of my time and energy–not to mention my dashed dreams and desires for my family–it revealed a different and darker side of me. And the reactions that she produced in me were not her fault; they were my fault. The sooner you can get used to the reality of life with a disabled child, with all the sacrifices that it requires, the better off you’ll be.

Write a letter. During a class I attended on grief, one of the assignments was to write a letter to the person or thing I was grieving about. I wrote to the woman I hoped Holly would become, telling her about my dreams and expectations for her that could never be fulfilled. I wrote, “For a long time it has been clear that the Holly I see often will never be like you, the Holly of my dreams. So I am saying goodbye to you…. With God’s help I will greet and love Holly just as she is, without continuing to put my affections on you. You have served your purpose. Now I say goodbye to you.” It was an extremely difficult letter to write, but it was a necessary and healing step for me. When I’m with Holly, I am no longer haunted by the woman she might have been.

Be understanding with your wife. For many parents, one of the main challenges is understanding your spouse and the differences in way she reacts to the challenge of parenting a disabled child. She will move through the process in different ways and at a different rate from what you are experiencing.

To illustrate, suppose a mother still denies that her child has disabilities, while the father is in a stage of anger. Some of his anger may be directed toward his wife, who will just not face reality. If he understands that he and his wife are working through a painful process that will take some time, he can be more patient with his wife and live with greater hope for the future.

Consider another situation: the wife is in the bargaining stage (expending a lot of emotional energy and perhaps wanting to spend a lot of money), while the stress of parenting their disabled child has led the father to a stage of depression (loss of emotional energy). They can live with greater patience with each other and hope for the future if they understand that these differences involve working through a process that will take some time. For the sake of the marriage and the family, it is important for the husband and wife to move through these stages to love and acceptance of their disabled child as soon as possible.

Look forward with hope. As difficult as my adjustments were, Holly’s problems were much greater than mine. And I still had other very positive things in my life. I was a child of God, husband of a wonderful wife and mother, the father of another daughter, April, and my work was rewarding.

Perhaps your best assets as a parent will be an unfailing optimism and a long-range perspective. Dealing with the challenges of having a disabled child is a process, as I have pointed out, so it’s important to start repeating positive messages to yourself every day, or even more: “Where I am today does not determine where I will be tomorrow.” “I am working through a process that will take some time, but with God’s help I can do this.”

Al Gilbert is a husband and a father of two daughters. He lives in St. Louis, where he is retired, formerly an economist.