The xperts say that txtn is vry addictive and can suck out time n r lifes that we can b spending w/ r fam. Ppl get so preoccupied w/ wut evry1 else is doin that they 4get bout ther own family. We need 2 spend mor time w/ r fam and not r txtn buddies. Wut bout this tho..u kno what the rents r doin… Hav u evr seen the dad standin @ a soccer match or sum skl evnt w/ him pacing sidelines or goin outside the gym w/ a cell fone glued 2 his ear 2 ‘make that important call?’ Wut bout HIM txtn when hes supposed 2 b watchn me? Y cant I txt? Its more than I’m gettin out of him neways!

Was that as difficult to read as it was for me to write?

Remember the days when there were no cell phones and you used answering machines at your home—if you were lucky? Today we are used to seeing special announcements nicely telling folks to turn off their cell phones. Still, we hear them blasting off sometimes during church or at another event. Sometimes I feel like Andy Rooney: What is this world coming to where we have people walking around in a daze talking to these electronic devices? 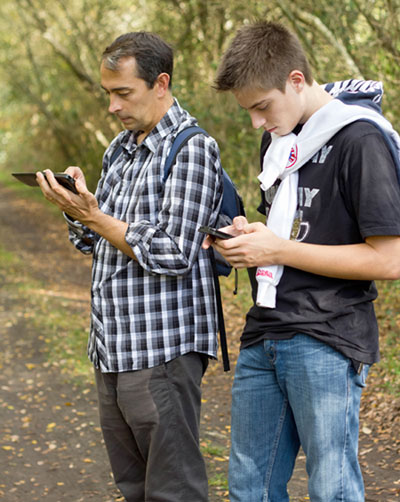 Maybe more importantly, what message are we fathers sending to our kids—especially for those of us who desire to be more present with them?

I’m definitely not against “progress,” but too many families are letting the use of cell phones and other technology—especially texting—distract them from more important goals: raising healthy, responsible children and staying connected to each other. I know I am not the only one who’s frustrated by this.

Teenagers are sending most of the 561 billion texts that occur each month; according to a Nielson survey nearly 4 years ago, teens with cell phones averaged 3,417 text messages a month. Maybe they’re just being kids and taking advantage of what they’re allowed to do, but as fathers maybe we should be more concerned, because that isn’t always what’s best for them.

First, it hinders their ability to form positive relationships.

Increasingly, today’s kids are often distracted and not able to tune in at home. One expert said that it leads to a kind of “mental brownout.” Many of today’s teens find it difficult—or maybe just boring—to really be “present” with their parents and siblings; they don’t know how to listen and be engaged in meaningful ways. They think they can keep up with texting their friends while they’re doing homework or interacting with the rest of the family, but in reality they’re distracted and greatly reducing those potential connections.

Related to that, I believe this way of life is detrimental morally and spiritually. For me, the things that are truly lasting, and the values that are most important in life, are not the things that are instant or urgent, which describe the world of texting. But for many teens, that’s the only way they know how to operate. It’s like they’re addicted to their phones. The notion of setting aside their phones for a while so they can have a one-on-one conversation or pray or meditate is foreign to them.

Where’s the balance for us as fathers? I understand that kids need phones sometimes so we can reach them and know where they are; the security factor is legitimate. But then, when I see some kids text each other from the same house or the same room, or they can’t keep their eyes off their phones as they’re walking down the street, or they find it difficult to carry on normal, face-to-face conversations, I know something is wrong.

If the world becomes colder and more plastic, that isn’t good for our kids today or the children of the future. As fathers, we can’t afford to let them simply drift off into an existence of texting, emails and constant phone chatter.

What can we do? I would be very interested in getting your comments, because I know there are many dads out there who are addressing this in positive ways. Here are a few of my thoughts:

First, you need to be the example. If we’re honest, many of us have to admit that sometimes we’re guilty of sitting right next to the most important people in our lives, but they’re texting their friends while our iPhones or Androids are burning up with our own stuff, whether it’s work projects, social media, sports, stocks, or whatever.

Also, think about ways you can initiate positive, non-electronic interactions with your kids. Give them lots of experiences that will show them that genuine, face-to-face connections are so much better.

And second, have the courage to make positive changes, even if they are unpopular. If your children are already used to texting their friends whenever they want, they won’t like the idea of limited access to their phones. But often, that’s exactly what is needed—and remember that you’re actually protecting them from some unhealthy habits.

Decide to turn off the phones so you can connect in a more genuine way.

For me, it makes a lot of sense to designate times and places as “no phone zones,” such as the dining room or the family room, especially if there’s a family gathering going on such as dinnertime or a family night. Maybe you can clear a block of time when homework is a priority, like between 4:00 and 6:00 p.m. Maybe you can set up a charging station in your home, where all the phones and devices have to be kept every night after, say, 10:00 p.m.

If it helps, one simple solution would be to utilize your service provider’s parental controls. Typically it adds a few extra dollars to your monthly bill, but allows you to specify a number of text messages a phone can send and receive, or limit the hours a child can send those smiley faces and LOLs.

Once again, I hope some of you will comment with ideas that have worked for your family.

Bottom line, dads, you can play a big role in shifting the focus and helping your kids grow in important ways, so they can become more thoughtful and more relational. Think about the message you’re sending about your priorities and your communication with your children, and instead of allowing them to spend every waking moment texting, decide to turn off the phones so you can connect in a more genuine way. In doing so, you can help teach them self-control, which will spill over into many other areas of their life as well.

Dave Clark is a master trainer for the National Center for Fathering and is the founder of The Father’s Cry, an international fathering ministry. Dave and Kim, his wife of 40 years, live in Texas and have two grown sons.