It was the fall of 1999. Earlier in the year my career had taken us to a new town 125 miles away from our nearest family. Valerie and I were adjusting to new jobs, and our 10-year-old son and 7-year-old daughter were making new friends and beginning to establish their identities in a new school. We hadn’t sold our previous house or purchased a new one yet, so we were renting. To say all of our lives were a little out of whack would be an understatement, but we knew it had been the toughest on the kids.

It was an odd time. It felt like a permanent vacation. Back in our home town we could count on seeing people we knew every time we went to a store or visited a restaurant, but now we were anonymous. And so, faced with the prospect of spending Christmas in a duplex that didn’t feel like “home”—and probably never would since it was only temporary—we decided to shake things up that year. 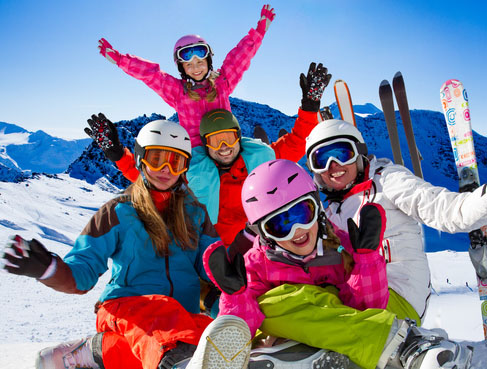 Another factor in all of this was an eye-opening realization during the move itself. In our 17 years of marriage and our ten-plus years of being parents, we had accumulated a lot. The amount of “stuff” we moved to our new town was absurd, and I’m not talking about furniture, bikes, garden tools, books or clothes that we actually wore occasionally. This was stuff we hadn’t seen or even thought about, much less used, for years—mostly toys and clothes. It was humbling.

That October we made the decision to take our family vacation during December and guarantee our kids a white Christmas. It was a perfect solution. We hadn’t had time for a vacation earlier that year, and if the kids never received another toy as long as they lived, that would be okay with me. So we took our vacation budget and most of our Christmas budget and rented a condo in Winter Park, Colorado. Even though Val and I hadn’t been skiing since high school, we decided we were going to teach our kids to ski.

We took a fraction of our normal amount of presents, a small box of ornaments, a strand of lights and our Christmas stockings for the fireplace mantle. After arriving, we found a Christmas tree that would have made Charlie Brown proud. All four of us shopped for our meals that week, including Christmas dinner. We explored the town and the slopes.

We totally broke the mold that year. Everything was different, including skiing on Christmas day. While we didn’t actually skip Christmas, we did skip accumulating lot of “stuff” and instead substituted experiences. Everyone agreed that it was awesome, and Christmas hasn’t been the same for us since.

Does this sound familiar? In 2001, John Grisham wrote “Skipping Christmas.” (You might also recognize the movie version, Christmas with the Kranks, starring Tim Allen, which is not an adequate substitute—trust me.) It’s a wonderful story of Luther and Nora Krank, who decide they will skip Christmas after their 23-year-old daughter departs for Peru the Sunday after Thanksgiving to spend the next two years teaching children to read.

Having their only child gone for Christmas leaves the Kranks stressed and depressed, and Luther quickly comes up with all the reasons why his December will be better without the tree, shopping, clutter, wrapping, crowds, fruitcake, office party and wasted money. They’ll take a Caribbean cruise instead.

This is nearly a crime to the Kranks’ neighbors and friends, and things get hilarious as Luther and Nora face public ridicule and scorn, and then everything seems to conspire against their plans to escape.

Like many folks, I can totally relate to the story. After all, there are no essential characteristics of Christmas that require us to be stressed out, worn down or maxed out financially. However, we often do that to ourselves by over-scheduling, over-decorating, over-spending and overeating. And when it’s all over we have to find someplace for all our new stuff.

Can you remember even one Christmas present you received as a child? I can’t, and I’ll bet my kids won’t either. But I do believe they will remember the times they spent with family and friends. Times spent cooking, sharing a meal, playing games, laughing, watching movies, learning something new, talking with one another and just enjoying each other’s company. Christmas should be the time of year when we slow down, reflect and be thankful.

Over the past sixteen years we have returned to Winter Park or another ski town probably a dozen times during Christmas—or sometimes the week before or after. We have invited family and friends, including a trip with my mom and dad when my dad, at 67 years old and dealing with Parkinson’s, decided he wanted to learn to ski. He was amazing.

A couple years ago our now-adult children brought their boyfriend and girlfriend with us, and we watched our kids teach their future spouses to ski. Our son was married last January and decided on a ski trip for their honeymoon. And just recently our daughter’s boyfriend asked my permission for her hand in marriage, and they will be married next December. (No word yet on honeymoon plans.)

No, we didn’t actually skip Christmas like the Kranks tried to do. But I share some of Luther’s frustrations with what Christmas has become for so many people today. Thankfully, against his will, Luther eventually learns an important lesson about family and friends and the power of a single, thoughtful and well-timed gift. It is one of the best Christmas stories I’ve read, and I highly recommend the book. (The movie, not so much.)

I won’t give away any more of the story except my favorite line, which comes toward the end: “Luther paused to count his blessings.” That’s the most important thing I will do this Christmas, and it is my hope for you as well.

Merry Christmas from everyone at the National Center for Fathering and WATCH D.O.G.S.!

Eric Snow is the Executive Director of WATCH D.O.G.S. (Dads of Great Students), a father-engagement and educational initiative. He is also a member of the strategic planning committee for National PTA. Eric and his wife Valerie have two children.