Tomorrow I’ll think fondly of Dad. Which is odd, because I hated him when he was alive. 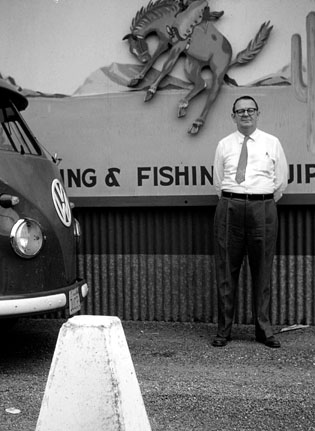 Dad was an angry, hard-swearing, tattooed man’s man. He’d been an Alaska bush pilot, but by the time I came along, he was a California travelling salesman, drinking himself to death. When I was two he got drunk and threw my empty crib across the bedroom. When I was 12, he challenged my brother to a fist fight. He routinely shouted at us in front of our friends. By the time I was 13, I wished he would die.

And then he did. I thought that my wish had killed him, and for the longest time I couldn’t forgive myself. I was scared to death I would damage someone else.

To my surprise, as I became kinder to myself, I formed a more rounded picture of Dad. His anger had its reasons. His father died young, leaving him with a stepfather who favoured his own kids. When Dad was 14, his preacher grandfather hauled him in front of the congregation and viciously denounced him for teaching other kids the Charleston.

Humiliated, Dad ran away from home and joined the carnival, growing up on the road with hardened carnies. In middle age, his sales job was crushing. He was a brilliant man with a Grade 8 education, reduced to knocking on doors and imploring merchants to buy advertising promotions like imprinted pens and squeeze coin purses.

But Dad’s biggest problem was that he never got in touch with his own pain, never learned how to process his feelings. Like many men, he believed the lie that “Big boys don’t cry,” so he refused to seek out friends and instead turned his pain into anger.

The anger kept shameful sorrow at bay. Swigging vodka straight from the bottle, he forced us to cry his tears.

This was the Dad I hated. But a funny thing happened after I forgave him. A different Dad returned from the shadows, borne by a flood of memory. I found myself recalling the times when he didn’t drink:

It was evening at the river. I was five, and Dad was still young and strong. We were camping in the California Coast Range. Although I couldn’t swim, I had wandered down to the river after dinner and paddled an inner tube out to the middle of the big dark pool. I lay back in the inner tube, gazing at the cliff that loomed above on the other side of the water.

Suddenly I slipped through the middle of the tube, and I was in the water, struggling. I sank into the cold dark water. As I resurfaced, I could see Dad running down the beach, tearing off his shoes and plunging powerfully into the river. Then I was under again, swallowing cold water, sinking into blackness …

Then I felt myself being pushed powerfully to the surface, as Dad rose like a sea lion below me. I gasped the air, and was saved.

But he had swallowed water, too, and began to cough and struggle himself. “Dad!” I cried in a panic. He sank below me, and I again fell back into the black waters, gulping and sputtering, stepping on his head. As we sank, the murky yellow light of the world receded into darkness, with no sound but my thundering heartbeat.

I felt his hands grip my calves and place my feet firmly on his shoulders. Then, as in the game we’d often played, he drifted down and bounced back up from the river bottom, thrusting me to the surface. And then his tattooed arm was around my chest, towing me to safety. Keeping my face above the water, he coughed, then murmured, “It’s OK, Cal. It’s OK.”

Finally we staggered on to the sandy beach. As I stood gasping, shivering and crying, he hugged me to his heaving chest. Then he went to the trailer to get a towel and wrapped it around me.

Later, as he heated hot chocolate on the Coleman stove he did the unusual — he sat me on his lap. After a while, he turned the Giants game on the radio, and we sipped hot chocolate while the sun sank behind the cliff.

At the end of his life, I think Dad, like me, had forgotten that day. He forgot his goodness. I wish that, when he ruminated on his failures, he had been able to remember the good things. I wish that, when he thought of his years of unemployment, his bankruptcy, the jalopies he drove, his failed marriages, his destructive anger, that he had been able to recall that day on the river. Most of all, I wish he’d had a kind father to remind him of the good things about himself — his sense of humour, his charm, his ability to spin a story for a crowd, his compassion for the unfortunate, his intelligence, his ability to make a day’s outing with a young boy into an exciting adventure.

Calvin Sandborn is a professor of environmental law and the legal director of the University of Victoria Environmental Law Clinic. He is the author of Becoming the Kind Father: A Son’s Journey (New Society, 2007). He can be contacted at csandborn@law.uvic.ca.