As I look back on my own personal experiences with co-parenting, I can only draw one conclusion: I could have saved a lot of time and avoided a lot of stress if had I worried more about my behavior than my ex’s.  To save other guys the same painful and unnecessary process, here are the challenges that I faced when I became a single dad and had to learn to co-parent with my ex and the hard lessons I learned.

We can all relate to those words. Somehow our relationship has ended and we are single parents. The legal system decides the portion of custody we have of our kids. It’s typically given in percentages, (70/30, 60/40, 50/50). I am still confused about how this is calculated. And yes, it hurts to know that the courts favor mothers over fathers. But that is the rule of the game guys, and I had to get used to it! Initially, I had only 30% custody, but I held my head high and never gave up on wanting that percentage to change. 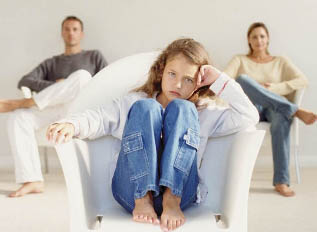 Co-Parenting; Why Is It So Difficult?

My divorce was much like everyone else’s. We spent a lot of time on emotional battles and a lot of money on attorney bills. I continued to harbor bad feelings about my ex-wife and the legal process.  I couldn’t see that I was carrying around a bitter grudge that showed up any time there was communication between the two of us.

During this time, I found every opportunity to win an argument or point out the flaws in her parenting skills. I was the better cook; I had the kids on time at school more often than she did … you get the point. I made her “wrong” at every opportunity I could. Simple but important discussions (like teacher/school appointments, clothes shopping, medical information, drop offs/pick ups) were all lost in short, bitter arguing. Nothing was getting accomplished. Somehow I thought that that temporary gratification of winning an argument would ease the pain I was going through. I completely lost sight of my priorities, my children.

What We Forget: Our Children

The environment I created with my ex-wife was hostile. What made things worse was that I used “She started it” and “She will have to make the first move to change her attitude” as excuses to continue this unhealthy environment. I wasn’t realizing that most of the time my ex-wife was only defending herself.

More importantly, she was trying to keep her communication with me at a minimum to keep the children away from the arguing. Yes, the children. I forgot about my children. Kids feel and sense pain and sadness in their parents and I had to take a hard look at what I was doing to them. The signs were all there: They didn’t eat well. They wouldn’t sleep through the night. They were not excited about school anymore. My kids were not exposed to any positive emotions at either home anymore, and it looked as if the life was taken out of them.

The Epiphany: Outside Looking In

It’s funny how we can see everyone else’s problems, but never our own. Well, this is how I discovered my problem and when I decided to ask for help. It was a Saturday afternoon and I was going back to my office to finish some paperwork between soccer games. I had decided to stop off at a fast food restaurant to get a quick bite when I saw a man and a woman arguing in the middle of the dining area. It just struck me as odd that these two people were standing “toe to toe” in the middle of an empty fast food restaurant on a Saturday afternoon.

As I approached the counter, I noticed two kids standing alone in the play area, almost motionless on the other side of the dividing glass. They were staring at the two people arguing. All I could think about was getting my food so I could get away from those crazy people. My server looked as if she had read my thoughts and said, “They’ve been doing this every week for about a year when they exchange their kids. They must be divorced or something.  Every Saturday afternoon he will sit in our playground for the three hours and watch his two kids over there play or sometimes he just sits alone and cries by himself.”

Wow. I just heard the worst story of my life. It was the story of where MY LIFE was heading and I didn’t like it. I took about three freeway exits and half of my “not-so happy meal” to pick up my phone and call my ex-wife. When she answered the phone, I told her what I saw and that I didn’t want to be any part of that anymore. I told her I was willing to do anything to change the way we were headed.

The Solution: Ask for Help

Everyone has a process and everyone has a story to share. There are so many variables to why co-parenting with an ex-spouse is challenging. My solution was to work on myself first and to believe that if I changed my outlook, my attitude and my communication efforts, that would make a difference in my relationships. I sought help from professional family counselors in my area.

Immediately I saw a huge difference in my children’s behavior. They started smiling, laughing, and sleeping through the night again. The response from my ex-wife was skeptically optimistic. (I couldn’t blame her caution.) I saw change in myself. I found the classes and sessions in family counseling to be a great positive, learning experience. It was work, but I was committed to making a difference for my children.

Here are a few tips that can help make co-parenting a little easier: