5 Ways to be a Great Dad

Last summer I was selected as the 2014 Kansas City Father of the Year. What a humbling and surprising experience! Braxton, my 15 year old son, had written an essay for his English class titled “What my Father Means to Me,” which was chosen as the ninth grade winner. (You can read all the winning Kansas City essays here.) 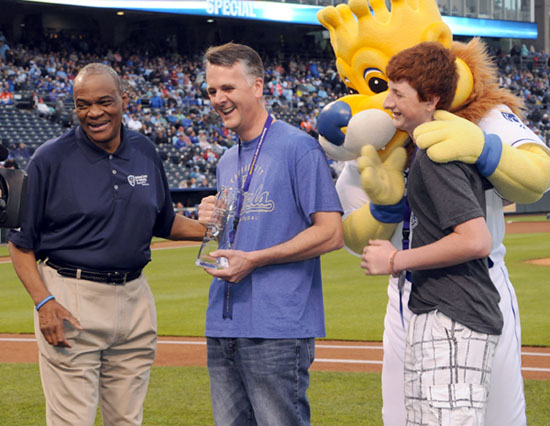 At the awards ceremony, I learned why the other fathers and father figures were finalists, and realized that each of those men was clearly just as qualified to be the winner. Being with great fathers was invigorating, and taught me other things I could do to up my game.

A father plays a unique and important role in the lives and development of his kids. Mothers are important, but a father brings different qualities to the table. A number of studies have demonstrated the benefits of having a father involved in a child’s life. Inherently, all of us dads know how important it is to be a good father. I was fortunate to have a good role model with my own dad.

Shortly after I was announced as the winner, I was interviewed about what it takes to be a good father. I’m always quick to admit that I don’t have all the answers, but if I had to identify what makes for a great dad, I would start with these five areas:

For me, spending time with your kids is the most important thing about being an effective father. Sometimes it’s just being together. I have no idea how to create “quality time,” as it seems to occur spontaneously. Those little moments when you’re with your kids and you see or experience something together is what matters most. It’s also those times when you have an opportunity to teach a lesson or just have fun—and they become quality time.

I remember one Christmas a few years ago when Braxton received a toy engine that had to be assembled. A few days later, he asked if I would help him build it. That wasn’t part of my plan for the day, as I was focused on things that needed to be done around the house. I just didn’t want to do it at that time, but I eventually agreed to help him. We spent several hours working on it together, and after we were done he kept saying, “Thank you.” Over and over again! It melted me when I thought about how selfish I had been, and how much he needed me. Thinking back, I have no idea what chores were so pressing that day, but the time I spent with him was monumental, for both of us.

Before my wife and I were married, we talked about what our family would be like. My job at the time required 80% travel. I really enjoyed the work and the camaraderie, but we knew that wasn’t how we wanted to operate long-term. We decided that when kids came along I would find a job that was more accommodating to family life. And ever since, I’ve intentionally found companies where work/life balance is more than just a phrase. I like my job, and the rewards that come from it. However, it does not provide the deeper rewards that come with being a dad.

My kids are now at the age where they’re standing more on their own, but I’m not pulling away from them. Recently my youngest didn’t want a hug. So I gave him a huge bear hug, and kept hugging him until we were both laughing. I know him well enough to be able to break through that barrier, and I wanted to communicate that he isn’t too big for a hug. I know I can get away with that at home, but am also sensitive that it could be embarrassing to him if I did that in front of his friends.

Fathers typically push the boundaries and take more risks with their kids than mothers do. Sure, we have to be reasonable, but every once in a while it’s good to let your kids stay up late to watch a game with you, or set off together on a trail that you’ve never been on before, where you may have to figure out a way back. Taking risks like these can build great memories, and often will teach your kids how to solve problems.

Be a Father First, a Friend Second

Kids need boundaries, and part of a father’s role is to establish and enforce them. You will be tested, which is a natural thing for kids to do as they grow up. Don’t give in, but rather find the right balance between being firm and flexible. The old saying, “This will hurt me more than it hurts you” sometimes rings true, unfortunately. While it isn’t fun for anybody, it’s an important part of being a dad. Even though they probably won’t admit it, your kids will respect you for it.

There are no perfect fathers. Don’t wait until you think you have it all figured out to start being a major factor in your kids’ lives. (You’ll never get there.) Instead, ask your kids what’s important to them, focus on that, and ask for forgiveness when you mess up. Your kids don’t expect you to be perfect, but they do need you involved in their lives.

Just be a Father of the Year. Just be DAD.

Steve Huff and Debbie, his wife, were married in 1996 and are blessed with three kids: Braxton (16), Avary (15), and Brendan (12). They live in Topeka, KS, where he is responsible for IT security at a bank with locations in the Midwest. In addition to keeping the bad guys out, Steve enjoys spending time with his family, technology and travel.