As divorced fathers, particularly non-custodial ones, we quickly find ourselves without many of the rights and privileges related to our children that we had before. Some of these are taken from us by the nature of divorce, some by our ex, and some by the courts.

As a result, there are many groups and initiatives that champion fathers’ rights and encourage us to fight for those rights. I’ve had to do my share of that since the divorce. I’ve held my ex in contempt several times for not letting me see or talk to my kids, and for other efforts to interfere with the relationship between my children and me. 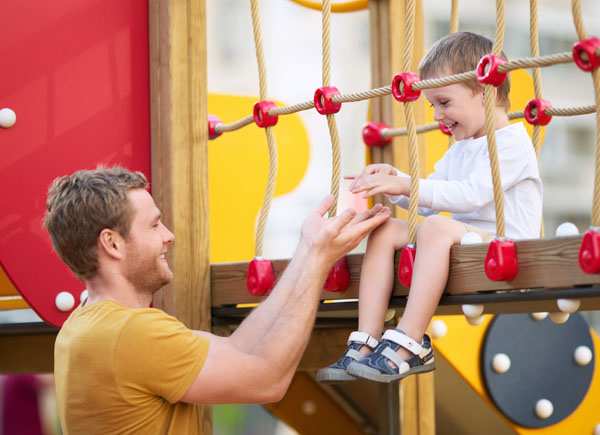 We need to be careful, however, when determining what we’re fighting for. We can easily get caught up in fighting for us—our rights, our reputation, our time—and not realize that our children are getting caught in the middle. And I’m not saying that those things aren’t worthy of a fight, but I often wonder, What is the goal—to better things for ourselves, or to better things for our children?

One example of this comes from a 1944 U.S. naval battle with the Japanese near the Philippines. Admiral William “Bull” Halsey led a fleet whose main goal was to protect the US invasion force. But Halsey was given another option as well, if the opportunity presented itself: to destroy the Japanese aircraft carriers. And that’s what Halsey did. He set off with his fleet of aircraft carriers and heavy warships to pursue the remaining Japanese carriers—a noble goal that could certainly help the war effort.

But in doing so he left the invasion force vulnerable. The U.S. forces heroically succeeded in turning away the Japanese attack, but in doing so they lost one ship, 23 aircraft, and almost 1,600 men; nearly 1,000 more were injured. Halsey had been lured into chasing a Japanese decoy that was no real threat.

Halsey was pursuing a worthy goal, but he allowed that pursuit to distract him from his primary purpose. And although the results were not catastrophic, there was great cost in hardware and lives—a cost that was, quite arguably, entirely avoidable.

I see many divorced fathers going through similar experiences. There is no doubt that we have lost many rights and privileges with our children, and we want those things back. But our primary job is to look out for the welfare of our children.

In the pursuit of our rights, our children can so easily get caught in the crossfire. They can be impacted in a variety of ways.

The first question we must ask ourselves when considering the fight for our rights as fathers is, How will it impact our children? What price will they pay? Divorces take a big enough toll on them. So often, the continuing battles between exes bring far deeper and more tragic consequences.

I’m not here to tell any man to stop pursuing justice or give up fighting for his rights as a father. I simply want to add a word of caution: We must choose our battles wisely. The primary goal of a father is not to defend and stick up for himself; it is to defend and stick up for his children. There are fights worth fighting—most definitely. But others are less certain.

Be careful to not let other ambitions, goals, or desires detract from your primary goal: being a father and protecting your children. The stakes are far higher for them than for us. Please choose wisely.

Just Fight for Your Children. Just Be Dad.

Scott Moore is a divorced, non-custodial father of a daughter and a son who lives in South Carolina. Through his blog at Building a Better Dad and his Facebook page, he offers other divorced dads (and married dads) understanding and encouragement to help them be better fathers despite their circumstances.