Making the Most of Long-Distance Fathering

One summer, pitcher Terry Mulholland was selected as the starting pitcher for the National League in the All-Star Game. Mulholland planned to reject the invitation and pass up a chance to pitch in the summer classic. Why? Because Terry is also a father. He’s a long-distance dad who saw the three-day break as a chance to catch up with his young son, Tyler. They’d planned a father-son fishing trip, and Terry was determined to keep his word. As it turned out, Mulholland’s manager gave him another day off, so he was able to pitch in the game and then fly to Arizona to take Tyler fishing.

There are such men who are recognized for wanting to be successful in the eyes of their kids, despite the distance. But for many long-distance dads, life is anything but glorious. Sometimes it seems you receive nothing but contempt from society at large. 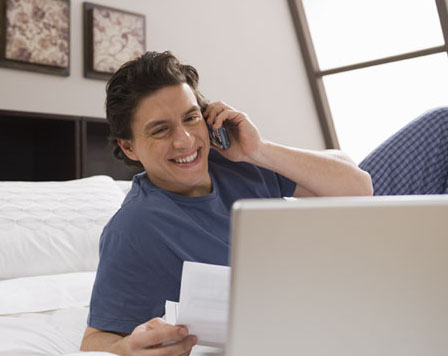 The one obstacle all non-custodial fathers must hurdle is access: seeing your children at any time and participating in the daily happenings of their lives. For many single dads, there’s nothing you wouldn’t give to have free access to your children. You must look at the men out there who do live with their children-but aren’t really involved in their lives—and just shake your head. The movie Mrs. Doubtfire and many other since have helped to surface a lot of these complex, difficult emotions.

And your situation has only been made worse by the unfortunate legacy associated with single fathers. Those men who are irresponsible and inconsistent with their kids, who are bitter and unforgiving toward their ex-wives, and who deserve the term “Deadbeat Dad” have helped to create an atmosphere of distrust toward all single fathers. No matter how committed you may be to your children, you’d be wise to realize from the beginning that it’s going to take time to earn back the trust that other men have squandered, whether you’re dealing with judges, social workers, or ex-wives.

Divorce naturally brings distrust between a man and woman. But even though she’s no longer your legal spouse, she’s still your children’s mother. Your kids’ sense of confusion and insecurity will be minimized by a civil, cooperative relationship between their parents.

There’s a simple plan for effective fathering which we call the I-CANs: Involvement, Consistency, Awareness, and Nurturance. Together they encompass everything that strong fathers do. For a divorced or long-distance dad, the problem of no access has placed you at a disadvantage. How can you possibly be highly involved in your kids’ lives?

A four-legged table is sturdy-much more so than one with three legs or two. In the same way, the four I-CANs make for sturdy, confident fathering. But if your situation has taken you away from your kids, losing that one leg (Involvement) may cause your “table” to wobble or even collapse. That’s no reason to give up; it’s a call to work even harder to bolster the other three legs—Consistency, Awareness and Nurturance.

Work especially hard on consistency—be regular and predictable in your emotions, your schedule, and in keeping promises. Your consistency will be most apparent in communication, support payments, and being prompt and reliable during visitation. Maintain an awareness: get feedback as often as you can about your children. Talk to teachers and coaches, and keep track of each child’s individual needs and concerns. Make sure you physically nurture them when you’re with them, but also do it verbally as often as you can. Instead of being lavish with new toys or other gifts, shower them with displays and words of affection. Affirm them for who they are and for what they were created to be.

YOU CAN’T MAKE UP FOR LOST TIME

Maybe you’re just beginning to realize the power and the rewards of being a good father. Maybe you feel you’ve let them down in the past. It happens to every dad, and it’s natural to want to make it up to them somehow. That’s a good instinct to have. Unfortunately, it’s easy to channel that healthy resolve into wild extravaganzas with your kids to try to make things right.

So maybe you take them to baseball games and amusement parks, and load them down with pennants, stuffed animals, junk food and a lot of confusion. Kids love these activities, but such “blow-outs” are only one side of a huge pendulum swing. A month of not hearing from their father and then POW. It can really shake kids up.

All children need regular and predictable contact with their father (Consistency!). An encouraging phone call once a week is more beneficial to them than four trips to Disney World strewn throughout the year. And think of your child’s mother: it’s hard to bring a child back down to earth after a week with dad filled with amusement parks and Pizza Hut.

What do you want your child to remember about your relationship during these years? A roller coaster ride? A grand slam home run? Or, would you rather have him remember many times with you, and none of them really stick out in his mind because the events themselves weren’t important. He simply cherished the chance to spend time getting to know his dad.

How would your kids define fatherhood? As a series of erratic, confusing phone calls? Broken promises? What Mom mutters about under her breath? They desperately need you to redefine fatherhood for them, because someday they may either become a dad or be married to one, and they’ll think of the influential men in their lives. If you’ve done your best to stay involved in their lives, they’ll think of you. And if you’ve been faithful and made the most of a tough situation, they’ll have a wealth of memories which will bring confidence and strength as they grow up, marry and bring up their own children.