“Sit down, you know better than that,” Brian barked. They immediately conformed to his command, tears running down their cheeks. In the interim, the Mudpuppys had made it to the fifteen yard line. “Second down and the quarterback’s keeping the ball,” he said with a cringe. “What’s the quarterback thinking? That’s right, pitch it! Pitch it to the running back!” Brian leaped to his feet and is screaming, “Run! Run! Run … and touchdown!” Now he’s the one jumping around the room, giving his children high fives.

Then came the sobbing question from his youngest child, “Daddy, does this mean we can get up?”

Brian’s heart sank. Why was fathering so frustrating for him? He felt like he was a good father. It wasn’t that he didn’t love his children—it just seemed like they didn’t listen to him.

The next day, Brian anxiously pulled out the old roster with Fritz O’Bannon’s number on it, but was hesitant to call because he didn’t want to admit he needed help. When the phone eventually rang and Fritz answered—he hung up. Brian’s face paled as Fritz was calling back. What was he supposed to say? Two rings, now three.
“Um … Hello?”

“Yes, this is Fritz O’Bannon. Someone just called me from this number but my signal must have dropped.”
“Darn cell phones,” Brian retorted in soft tone. “This is Brian Michaels, our sons played ball together this summer. I was calling because I needed … well, actually …” Then without warning he just blurted it out. “I hear they call you Touchdown Dad and that you provide therapy to fathers.”

“I call it coaching, not therapy,” Fritz said. “Were you in need of some help?”

“Yes,” Brian groaned. There, he said it. He set aside his pride and said it—he needed help.

“What do you say we meet on Thursday at Zachary’s Café on Main Street,” Fritz asked, “at seven?” 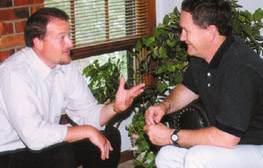 Thursday’s meeting began with a handshake. Then, following some brief talk about the weather, Brian began to share his frustrations with fathering. He explained that his home was very chaotic, how the children would be playing one minute and then arguing the next.

“Do you enjoy football?” Fritz asked.

“It doesn’t take a PhD to know that as men we understand football better than we do parenting,” Fritz explained. “Now, what if I told you fathering could be as simple as understanding a football game?”

Now Brian was nodding his head and smiling.

“Just like football—fathering requires a game plan—for that reason,” Fritz said, “the time you have spent watching Mudpuppy football is about to pay off.”

Brian pulled himself forward to the edge of his seat, his pen in hand, ready to take notes on his napkin.

“Conversely, children have only one father, therefore, there is no direct competition,” Fritz continued. “That said, we are our own opponent; we know our strengths and weaknesses because we are both our best player and our greatest challenger.”

Brian’s hand was writing notes as fast as possible.

“Next,” Fritz said, “consider the impact of a game plan. A football team has a very specific direction and goal. The team practices running, passing, punting, and the like, yet no one can predict the outcome of the game.”
Fritz’s hands were moving around like he was signaling in plays from the sideline.

“A parent’s game plan has the advantage that the options are unlimited: we can choose our teammates, where we play, and how much and how often we practice. Additionally, we make the rules, choose our position, and can influence the outcomes in our life.”

“How many chances does a football team have to make a first down?” Fritz asked.

“How many chances does a father have as a parent?”

“As fathers, we have as many downs as we are willing to attempt,” Fritz pointed out. “When things do not go as planned, and this will happen, we can change our approach and try again. Persistency is the key because there is no loss of possession. No failures—only results.”

Brian’s hand was starting to cramp as he was on his third napkin.

“The final advantage,” Fritz emphasized, “is that a football game is limited to 60 minutes. The quarterback is essential to the team’s success. Mistakes, however, are made and time is wasted; and when the clock expires, the game is over to both the excitement of some fans and the disappointment of others.”

Fritz paused, which gave Brian time to ask, “And time as a dad?”

“For us, fatherhood has no clock, once a dad, always a dad,” Fritz said. “This does not mean the clock is not ticking. Our children keep growing, learning, and maturing. We do, however, have the opportunity to be a part of our children’s lives every day, every week, ever year.”

Brian smiled and said, “Now I see why they call you Touchdown Dad.”

Fritz smiled. “I think that’s enough for one night,” he said. “Let’s meet again next week and we can continue to enjoy looking at how football can improve our lives as parents.”

“Yeah, this is kind of like coaching for dads, not therapy,” Brian said exhaling a sigh of relief. Then shaking Fritz’s hand, he placed his stack of scribbled napkins in his pocket and seemed to sprint to his car.

David Justus is the father of two and stepfather of seven. In addition to being an author, he is a motivational speaker and director of the Northcoast Fatherhood Initiative in Toledo, Ohio.